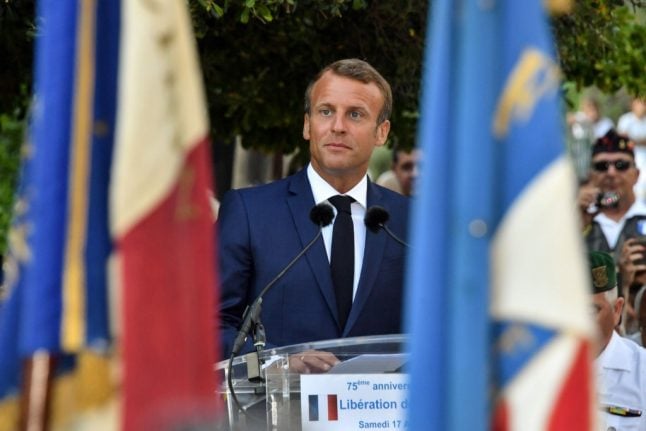 A tanned looking Emmanuel Macron is plunging back into the domestic agenda. Photo: AFP

Macron will be meeting British Prime Minister Boris Johnson on Thursday then heading down to Biarritz for the G7 summit, but once these are done his eyes will be firmly on the domestic agenda, and there are some issues that are likely to prove controversial.

READ ALSO: Macron to host lunch for Boris Johnson in Paris on Thursday This is a biggie as France is facing increasing economic pressure to reform its pensions system, but attempts by French leaders over the years to make any alteration to the system have in general led to furious opposition.

The proposals being made are of a reform of the current highly complicated system where there are 42 different pension regimes. These would be simplified into one system and private and state employees would be entitled to the same pension benefits. There would be some exemptions – for example people in physically demanding jobs would retain the right to retire earlier.

The most sensitive issue is the legal retirement age – when Nicolas Sarkozy tried to change this a decade ago, a million people took to the streets in protest. Macron made it a campaign promise that he would not raise the legal age from 62. So the proposals keep the legal age at 62, but contain incentives for people who choose not to retire until they are 64.

Mindful of the potential for conflict, the reforms are following a long-term plan which begins on September 5th when Prime Minister Edouard Philippe, who seems to get all the good jobs, will be meeting with social organisations and unions who are expected to be deeply critical of the proposals. Demonstrations against them have already been announced for September 21st and 24th.

The proposals are not expected to be presented to parliament before 2020.

This is another Macron campaign promise to extend access to IVF to single women and lesbian couples but there is likely to be resistance to this too, despite a recent poll showing that 65 percent of French people supported the idea.

The draft law will come before parliament on September 24th and socially conservative MPs are already warning that they will attempt to block it. The campaign group Manif pour tous, which co-ordinated protests against same sex marriage, is calling for a demonstration on October 6th. There's some good news for Macron on the financial front as unemployment in France continues to fall and is at its lowest level in 10 years, which appears to vindicate some of the measures he has taken to loosen France's employment laws and kickstart the jobs market.

On the minus side however is the €17 billion of tax cuts and financial aid that he has made in response to the 'yellow vest' protests. And there's also fears of a recession in Germany, which is France's main economic partner.

A cut in the number of civil servants is proposed in an attempt to ease the budget pressure, but the Court of Auditors has already warned that the proposals lack detail.

The Canada-EU trade agreement – known as Ceta – was an EU-wide negotiation, so that's not strictly the French government's fault but that has not stopped angry farmers from protesting and in some cases even vandalising the offices of MPs who backed the deal.

Their complaint is that it causes a decline in the quality of the products on the French market and makes it harder for French farmers to compete, especially at a time when many are already suffering from the ongoing drought.

“We will certainly express our dissatisfaction. We are not going to die in silence, or let ourselves be suffocated without doing anything,” Christiane Lambert, president of farmers' union FNSEA, told French media.
READ ALSO Why did a group of French farmers demolish a McDonald's? Emergency workers have been taking industrial action since April, but are legally restricted from striking. Photo: AFP
5. Ongoing strike action in hospitals
Emergency room staff have been staging industrial action since April and the protest has been slowly spreading across the country, with 219 hospitals affected at the last count. Staff are protesting about both pay and working conditions – saying that a lack of resources is making their working conditions intolerable and also endangering patients.
The government attempted to calm the situation at the start of the summer by offering a monthly premium of €100 for all emergency staff excluding doctors, but that failed to satisfy protesters.

Controversy over the Loi Blanquer – a package of reforms to the school system – has not gone away either. Before schools broke up for the summer there were sporadic one-day strikes and protests from teachers, as well as a refusal by some to mark exam papers for the Baccalaureate.

“In several regions, such as Rennes, teachers have already announced that they will refuse to assume the duties of head teachers at the beginning of the school year, as a sign of disagreement,” reported Le Parisien.

The controversial measures include plans to group schools from infant to primary and secondary together under a single administrative entity. Education minister Jean-Michel Blanquer will have to find some way of placating teaching unions and parents, who have also demonstrated against the new law.

READ ALSO: What is France's new education law and why is it so controversial?

After reading that to-do list, Macron probably wishes he was still on the beach.