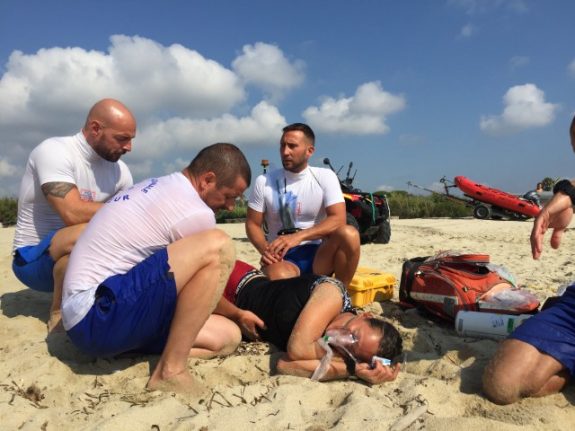 It was very good to be back. The beach at Pampelonne is a lovely place to go with your family. It may be only a short ride in one of the sinister black vans now favoured by the hospitality industry from jet set central St Tropez, but it is three miles of mainly-public sandy beach by the warm, clear and tranquil sea.

We’re a swimming family. We swim in the morning, we swim in the evening and every so often when the water’s particularly flat, we do what we call “l'exploit” and swim from one bay round the headland to the next bay and walk back.

Even on stormy days we go and muck about in the waves. So when the wind started to blow this year we hit the water.

There was an orange flag up. Beach flags are like traffic lights. Green for go, red for stop and orange for speed up or you might not make it in time.

So there we were bobbing around, having an alright time on the edge of the water. After a while I had the idea – questionable in retrospect – to swim out a few strokes to where the waves were bigger. And immediately found myself being swept out to sea.

I swam towards the beach as hard as I could but I was going further and further out.

I could see my wife. Increasingly terrified as she realised what was happening. Pierre, my sixteen year-old, a stronger swimmer than me, had understood quicker than anyone. He’d been out near where I was and had felt the current. And swam out towards me.

I was exhausted. And drinking a lot of water. Going under every time another wave crashed over my head.

Most of our memories are visual. I now have a very powerful one that is tactile – of Pierre’s hand pulling me towards the beach.

I reckon another three minutes out there and I would have been dead.

The lifeguards arrived as, supported by my wife and son, I was staggering back up the sand. They’d been saving someone else, one of them said a bit apologetically as she fitted an oxygen mask over my face. (I was feeling very good to be alive but a lot of thrashing about in the water and holding your breath puts the oxygen level in your blood right down. Makes sense really.) Pampelonne is a very popular tourist destination, despite its hidden dangers. Photo: AFP

The lifeguards saved several dozen people on that day and the following day, when the sun was back out and the waves had calmed down a bit.

The next day I learned from a lifeguard that a 59-year-old Italian tourist had drowned that morning. The lifeguards saved his wife and daughter but he was floating face-down when they got to him. After an hour on the beach they managed to get his heart beating again but his brain was dead.

This is Pampelonne, perhaps the most famous beach on the French Riviera.

And people drown here on a regular basis.

The summer before last a similar current killed the philosopher Anne Dufourmentelle, well-known for her books and programmes on France Culture. Her heart gave out as she tried to save two boys who’d got into trouble in the waves (and who survived).

Head of the local lifeguard team Mylène Matton told me: “Many people, many tourists don’t think the Mediterranean is dangerous but it is and it is getting more so. When the east wind blows, you have waves going right, left and straight ahead. It’s a washing machine.

“And that creates currents in the water that are much more violent than they used to be.”

A total of 157 people drowned accidentally swimming off the French coast last year. More than twice the UK figure. The Riviera (Provence-Alpes-Côte d'Azur) region is the most dangerous in France by a big margin and the most dangerous département is the Var (which contains the famous beaches of Hyères, St Tropez, St Raphael, Sainte Maxime, Fréjus, etc).

So what should you do if you find yourself being pulled by a riptide towards a watery grave?

Wave with both hands (if you can manage that). Once you’ve been seen, do exactly as I didn’t do. Go with the flow. Don’t try to swim against the current. Conserve your energy. Beyond the breaking waves it’s easier to stay alive and easier for the lifeguards to save you.

Or even better for those stormy days at the seaside – play Scrabble instead.

John Laurenson is a British reporter who moved to France after university. After a brief period teaching English (and learning French) he wheedled his way into journalism and has been making his living that way ever since. He had a longish stint presenting a BBC discussion programme about Europe and a shorter one doing TV but is best-known as a radio reporter for BBC Radio 4. He has reported from most countries in Europe and around the Mediterranean.