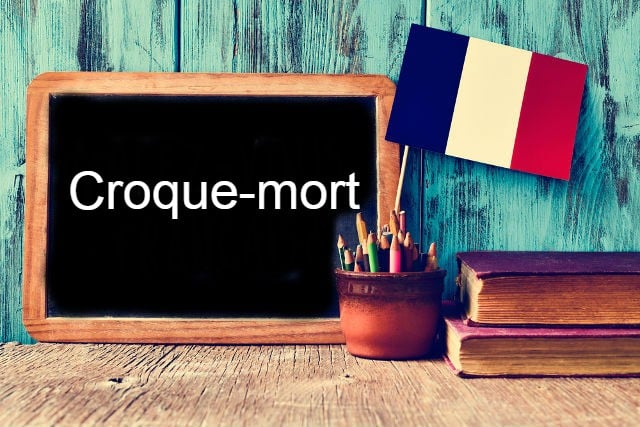 What do I need to know croque-mort?

Being a croque-mort is a job like any other else and you may have to call upon one someday. Behind this ill-omened term, stories on how it was born continue to have French people debating.

A croque-mort is another word for employé des pompes funèbres – undertaker, or literally translating to 'dead-biter'. Il est croque-mort, ça doit être déprimant comme métier. – He is an undertaker; it must be such a depressing job.

The term is slightly casual, so if you were talking to someone recently bereaved about funeral arrangements it might be better to use the more formal employé des pompes funèbres, but you won't insult someone if you use this to describe their work.

The most commonly spread legend on the origin of the word is also regarded as the least accurate of all.

A long time ago – possibly starting from the Middle Ages but no one knows for sure – undertakers supposedly had to bite the dead person's big toe to make sure they really were deceased. If there was no reaction, then the person could be buried.

While this quirky story is very popular among the French, two more plausible explanations have surfaced.

During the plague epidemics of the Middle Ages, survivors would use un croc de boucher – a meat hook – to drag bodies towards mass graves. The ending c is usually silent, but if pronounced, croc will sound like croque. This could have easily led to the creation of a word such as croque-mort.

Even the Académie Française, acting as the official guardian of the French language, has its take on the subject. According to the official body, the misunderstanding comes from the double meaning of the verb croquer.

Though little used in this sense, croquer can also mean 'steal' or 'make something disappear'. Sa soeur a croqué tout l'héritage! – Her sister stole the entire inheritance!

The word croque-mort would then simply take its origins on the image of someone 'stealing' people in the fashion of the Reaper, or making them disappear by burying them.

For more French words or expressions, head to our French word of the day section.