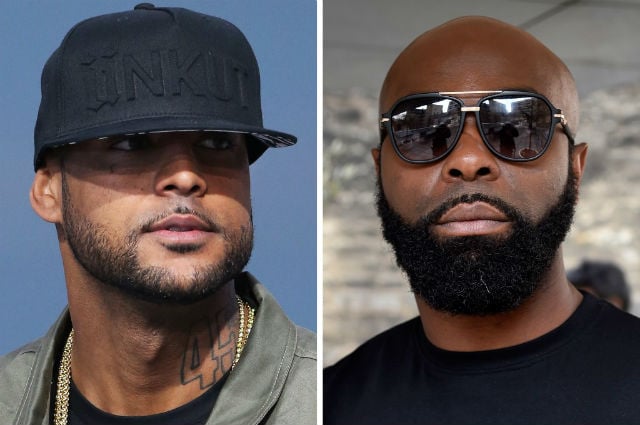 French rappers Booba (L) and Kaaris (R) planned to settle their differences with a bout of ultra violent MMA. Photo: Dominique Faget, Loïc Venance/AFP
Last week, the 9,000-seat St. Jakobshalle arena in Basel announced that Arch-rivals Booba and Kaaris, who were jailed last year after a brawl that shut down part of a Paris airport, would lock horns in an MMA (mixed martial arts) bout on November 30.
But on Friday, the education department in the canton of Basel-Stadt, which owns the arena, said that after consulting with local and regional police it had withdrawn the permit and cancelled the event.
“After analysing the security situation … it is clear … that the event cannot take place,” it said in a statement. The department said it had been the victim of “deception”, indicating it had not been informed of the nature of the event during the contract negotiations.
It also said it had learned that the two rappers had initially planned to have their event in Geneva, but had met opposition from politicians and authorities there.
“The organiser was personally informed this afternoon” of the decision, it said.
The pair had been drumming up expectations for the fight and goading each other relentlessly.
Ivory Coast-born Kaaris, 39, had promised he would drink his rival's blood, to which 42-year-old Booba, aka Elie Yaffa, replied. “I will (expletive) beat you to death, you son of a bitch.”
READ ALSO:
The two spent a month behind bars after they and their entourages clashed after bumping into each other at the airport in August 2018 on their way to concerts in Barcelona.
They chose Switzerland for their fight because the ultra-violent sport of MMA is banned in France. The plan had been for the winner to walk away with 1.5 million euros ($1.7 million), while the loser would have gotten a third of that.