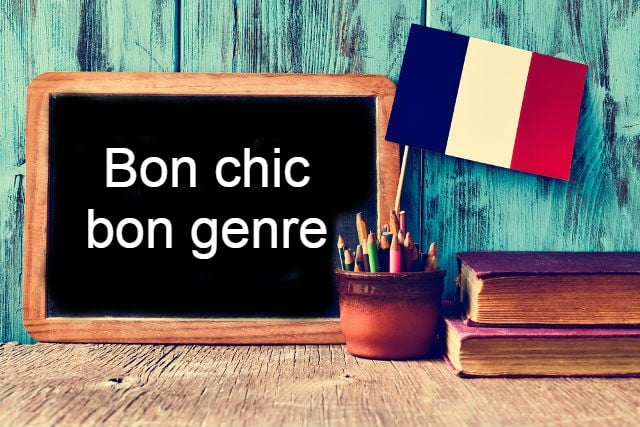 Why do I need to know bon chic bon genre?

This expression is widely used in France to describe a particular type of clothing or some people's attitude.

Bon chic bon genre, which can also be shortened to BCBG, is the French version of posh, preppie or Sloaney – ''Good style, good class''.

While chic can be quite of a compliment on its own, the expression bon chic bon genre tends to be used to describe and stereotype people from the bourgeoisie who try too hard to maintain a certain image of their life and themselves. While this is not an insult, this is also rarely used as a compliment, so beware.

For a French to describe someone as BCBG, they would most certainly have to wear at least one of these items on a day-to-day basis: a pearl necklace, an emblematic silk scarf from the high-end fashion brand Hermes or a three-piece suit.

Here is an example of how you could use this expression: Je ne vais pas acheter cette robe, elle fait trop bon chic bon genre! – I'm not going to buy this dress, it is way too posh!

In the collective imagination, it is also common to associate the expression with hyphenated first names such as Charles-Henri or Marie-Francoise and more generally to traditional Catholic culture and strict education.

In the 1990s, French humor trio Les Inconnus even recorded a song entitled ''Rap BCBG'' or ''Auteuil, Neuilly, Passy'', which are regarded as a triangle of posh Parisian neighborhoods where the BCBG tend to congregate, to mock people living in these areas and their supposedly complicated life.

This single was one of the biggest hits of the year 1991 and remains to this day a reference in French humor, so don't be surprised if you ever hear a local jokingly hum the song.
For more French phrases, check out our word of the day section.