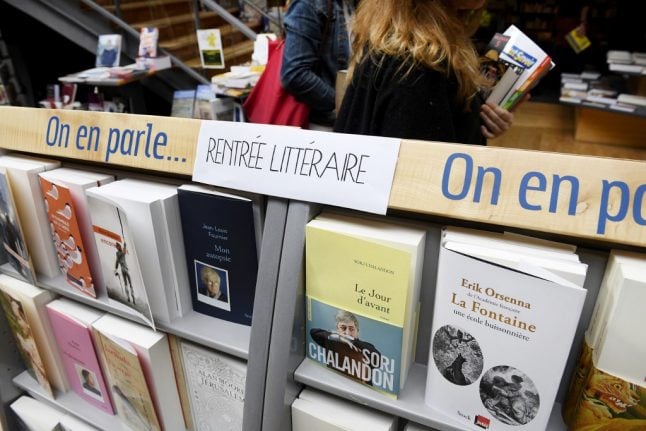 Every year, from mid-August until the end of October, publishers compete for readers’ attention as hundreds of new books are released. For the rentrée this year, 524 novels will be published, of which 336 are French, according to the trade journal Livres Hebdo.

The decades-old tradition owes its origins, as well as its endurance, to the concentration of France’s major literary accolades in the autumn. The Prix Goncourt, the Prix Renaudot, and the Grand Prix du roman de l'Académie française are just a few of the awards handed out to authors between the end of October and the beginning of November.

“After the Second World War, the literary prizes multiplied and began influencing sales,” explains Jean-Maurice de Montremy, publisher at Alma éditeur. “The idea of these prizes is to stimulate the sales of Christmas presents.” While burgeoning writers might hope to be published in August or September, new novels by the most famous French authors are often released in October, according to de Montremy, “in order not to disturb the prizes, which have already been decided,” but still in time for Christmas.

The proximity of award season to Christmas makes Autumn the most important time of year for French publishers. The period from September to mid-December accounts for “easily half their annual turnover,” says de Montremy.

Booksellers have to be ready to supply the latest hits, as well as helping customers discover hidden gems.

“After the summer, which is a very calm time in bookshops, I’m happy to get back to the exhilarating atmosphere of the rentrée, even if it’s a lot of work,” says Marie Balacker, in charge of the literature section at the Librairie Kléber bookshop in Strasbourg.

In preparation for the autumn, she and her colleagues try to read “at least twenty books each”. This year, they have decided to stock approximately 450 different releases.

For readers, it’s a chance to discover new voices. 82 of the 524 novels set to be published this autumn are débuts.

“The press gives a lot of attention to first novels. It’s a very powerful spotlight,” says Gregory Berthier, deputy editorial director at the French publishing house Plon. He cites the example of Gaël Faye, whose début novel Petit Pays was released in August 2016 and went on to win several awards. Just being published during this period is itself a form of “recognition” for an author, the publisher adds.

Berthier acknowledges that it is “economically crazy” for publishers to release so many books in such a short space of time, but he cannot imagine them putting an end to the practice anytime soon.

His publishing house, Plon, are preparing to release four novels during the rentrée: “We made the choice to publish fewer books, because we want to defend them well and make sure they get read.”

Alain Viala, emeritus professor at the Sorbonne Nouvelle university in Paris and at the University of Oxford, and a specialist in the sociology of literature, blames a “crisis of overproduction in publishing”, which reaches its peak during the rentrée, for the current trend of releasing over 500 novels in the space of two months. “At least this strategy of overabundant supply can sometimes give an opportunity to début novels which would otherwise struggle to find a place,” he adds.

But with so much noise, there will always be books which go under the radar and fail to arouse the desired attention.

Cutting through the noise

Jean-Maurice de Montremy, who began his career as a literary journalist and writer, believes it is becoming more difficult for authors to get noticed.

“Before, there were a dozen newspapers where you could hope to get something mentioned. Today, there’s less space in the literary press, and it’s become a race to talk about the same thing as everybody else.”

“What annoys me about having so many books in such a short space of time is that certain authors crush others with their enormity, and booksellers and readers miss out on smaller texts which deserve to be discovered,” says Marie Balacker of the Librairie Kléber.

To respond to this concern, another phenomenon has been gaining traction in recent years: A second rentrée littéraire in January allows authors to find readers in a less crowded market.

What's out this year