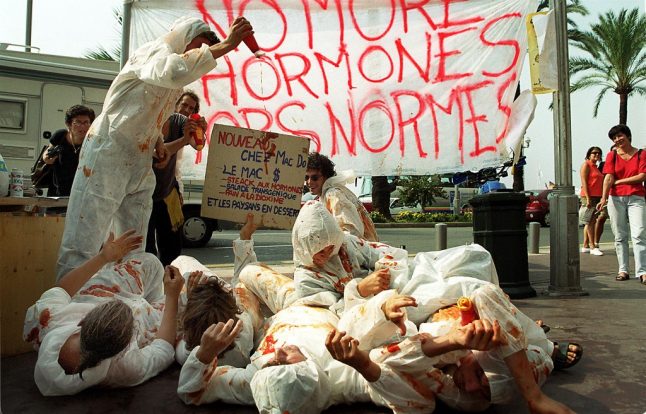 Support for the farmers' protests over US beef with high hormone levels. Photo: AFP

In August 1999, a group of five farmers who were members of the local farming union went to a partially built new McDonald's in the south west town of Millau, in Aveyron, and tore it down.

They announced the event beforehand at a press conference and invited people along to watch, and also held a Roquefort-tasting as the demolition got under way.

They caused €120,000 worth of damage and the five were tried in the criminal court in Millau later in the year. Four of them were given suspended sentences but the ringleader, José Bové, was jailed for three months. José Bové, right, and his co-accused in court in Millau. Photo: AFP

Why did they do it?

Well the protest was really aimed at America, of which McDonald's is always a handy symbol. At that time, the US and the EU were involved in a fight over imports and tariffs (which may sound familiar to readers today).

Essentially the EU was refusing to allow imports of American beef because the high levels of hormones used in farming in the US meant that the meat didn't meet EU food standards. America responded by imposing punitive tariffs on European products including cheeses made from raw sheep's milk such as Roquefort – which is where the Millau farmers come in as the region is a major producer of both milk and cheese. Thousands protested across France, demanding that Bové be released from prison. Photo: AFP

The case rapidly became a cause celèbre in France and José Bové was seen as a martyr for people standing up for environmental concerns. The case came a a time when there were a lot of worries around genetically modified food in general, and many environmental activists took up his cause. There were demonstrations around the country demanding that he be freed, and many others McDonald's sites saw protests and pickets outside.

After his release Bové, who had been an activist as well as a farmer long before the Millau demolition, became more involved in politics and in 2009 was elected as an MEP as a member of the Green party. And what about the tariffs?

Well anyone who follows the news will know that threatening tariffs is a favourite measure of the current US president who has repeatedly threatened to slap extra tariffs on French goods including Roquefort, seafood and wine in retaliation for initiatives from the French government such as a tax on internet giants.

French farmers are still concerned about the import of foreign food stuffs, with current union leaders citing worries about the Ceta (EU-Canada) and Mercosur (with several South American countries) trade agreements, which France has signed but not yet ratified.

Nicolas Girod, national spokesman for the Confédération paysanne et producteur de lait (farmers and milk producers union) in the Jura region, has promised a “hot autumn” of protests against them, including at the G7 summit in Biarritz at the end of August.

The McDonald's in Millau was later rebuilt and remains open today.

After the Millau protest, however, McDonald's did introduce a pledge to use more local ingredients in their restaurants, so if you think your Big Mac tastes better in France, it could be because it's made with locally sourced beef.