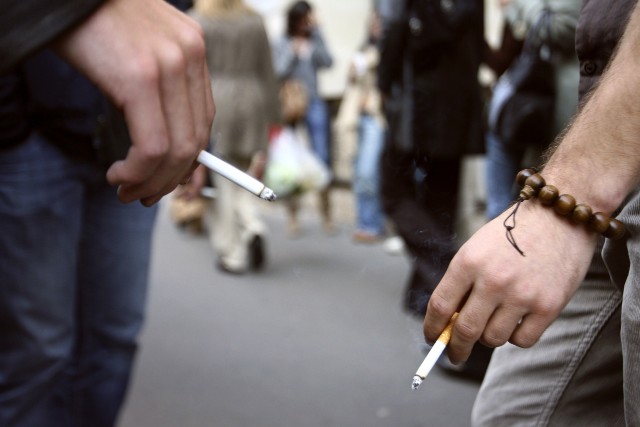 Some smokers seem unable to find nearby bins. Photo: AFP

Alarmed by the number of cigarettes butts littering the ground, a Twitter user who goes by the name of @Kingchris287 suggested that people grab a bottle, go outside to pick up cigarettes ends and then post a picture of the container filled to to brim on social media.

As suggested by 18 year-old Amel, the #FillTheBottle challenge was born.

In the blink of an eye, the challenge was all over the platform, and more than 30,000 tweets were sent in 24 hours.

All across the country, from city streets, parks to seaside resorts, people rose to the challenge. For some, twenty minutes were more than enough to complete the test.

'No words needed. The pictures can speak for themselves.'

Though throwing cigarettes butts on the ground is punishable by a €68 fine, some of France's 16 million smokers seem unable to spot a bin.

Well, this is the concern of young people who joined in – many pointed out the presence of a bin in the surroundings of their collection area, pointing out some smokers's laziness and incivility.

According to the World Health Organisation, just one cigarette end can contaminate up to 500 litres of water and takes up to 12 years to biodegrade.

'Pollution is not a myth.'

The phenomenon has taken off to such an extent that restaurants in Brest and Toulon are now doing their share to encourage communities to pick up the challenge, by offering a free coffee or a free beer in exchange for every filled bottle.

In Deauville, Normandy, the town hall will give free admission to the local pools and tennis courts in exchange for a filled bottle.