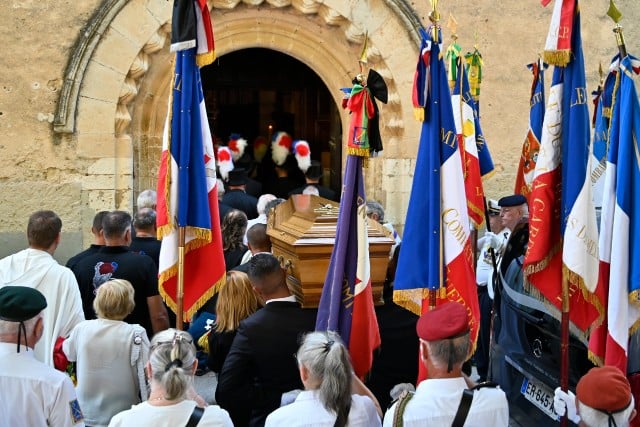 Jean-Mathieu Michel, 76, died on Monday evening after he pulled up and ordered two workers who were dumping rubble by the side of the road to take it away.

The men obeyed, but when the mayor told them to wait for the police arrive to issue them with a fine they attempted a getaway, reversing into Signes's mayor of 36 years and killing him.

Investigators are treating Michel's death as accidental, but it has plunged the town and mayors throughout France into mourning for a man described by residents as a devoted public servant, a man of the people.

President Emmanuel Macron on Friday posthumously awarded him the Legion of Honour, France's highest civilian honour, for “tireless devotion” to his town. In a message read out at the funeral, Macron vowed to “personally see to it” that anti-social behaviour would be met with an “uncompromising” response.

Hundreds of people attended the service in the valley town with a population of 2,800, 50km east of Marseille. They included France's minister for territorial cohesion, Jacqueline Gourault, and Senate President Gerard Larcher.

Deputy mayor Alain Reichardt told the mourners that Michel, known locally as “Jeannot”, had died “trying to uphold the law, defend his territory and ensure respect for the environment”.

Michel was driving around the town with three other people to view sites for municipal garbage bins when they came across the men on a road leading to an unlicensed dump.

The driver of the van, a mason working for a construction company, has been charged with manslaughter.

His lawyer Julien Gautier told reporters the 23-year-old was “devastated”. A 20-year-old apprentice who was also in the van was released without charge after questioning.

On Thursday, hundreds of residents had observed a minute's silence for Michel outside Signes's town hall and then sang the national anthem.

“He was a lovely man, devoted to his town to the point of dying for it,” former kindergartern principal Doris Ziglioli told AFP.

The mayor of nearby Belgentier, Bruno Aycard, described Michel as “a gregarious character who adored his village” and loved attending municipal feasts where bouillabaisse, a traditional Provencal fish stew, is served. Aycard described the dumping of waste as a problem that also plagues his town.

“No one should die for a pile of stones,” one woman wrote in a book of condolences opened for Michel.

The death comes amid mounting concern in France over violence against elected representatives following a spate of attacks on the offices of MPs from Macron's Republic on the Move party.

While those attacks were mainly carried out by opponents of a free-trade deal with Canada championed by Macron, many mayors have also complained about
what they call the public's increasingly aggressive attitude.

“I think that citizens allow themselves to say or do things they would never have done before,” Marie-Jeanne Beguet, mayor of the eastern French town
of Civrieux, told French online news site 20 Minutes.