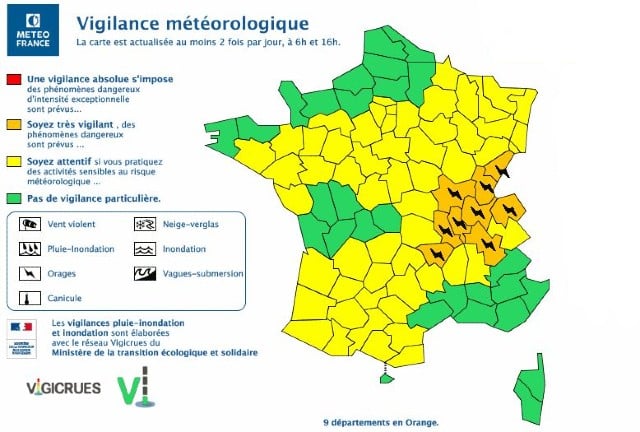 French weather forecaster Météo France has issued the warning for extremely heavy rain and thunder storms in the eastern part of the country.

The alert began at 10.30am on Tuesday and runs until midday Wednesday.

Météo France said: “From the beginning of Tuesday afternoon storms will multiply over the Massif Central. They will then head back up towards Switzerland. These storms are shaping up to be strong.

“In the départments placed on orange alert, heavy rains of between 30 and 50 mm per hour are expected (generating a risk of runoff and local flooding). Hail, wind gusts between 80 and 100 km/h and sustained electrical activity are expected.”

Although the places on orange alert are in the east, most of France is expected to get a taste of rain and storms on Tuesday or Wednesday. Map: Météo France
Storms are expected overnight Tuesday and into Wednesday in Aquitaine, Midi-Pyrénées, parts of the Massif Central and Rhône-Alpes.
Northern France including Paris and Brittany are forecast to get rain and some thunder early on Wednesday, with the storm clouds moving to the south east and south west later in the day.