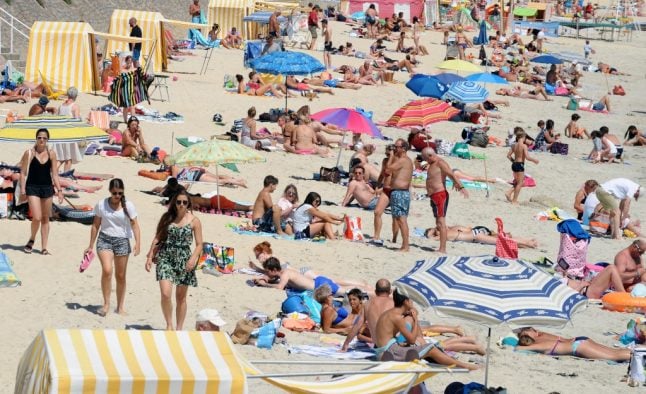 Is everybody in France on the beach this month? Photo: AFP

The French have a reputation for always being on holiday. But do they really get that much time off?

First things first. Everyone who works in France is entitled to five weeks’ paid holiday (congé payé) every year, regardless of their contract type, whether they work full-time or part-time, and how long they’ve been working for the company.

Now for the trickier part. French workers are entitled to 30 business days (jours ouvrables), which is every day of the week except Sunday. However, since most people work five days a week, this means 25 concrete days off every year.

On the other hand, working days (jours ouvrés) are the days your company is open, typically Monday to Friday.

No holiday for the first year of work

Something which often surprises foreigners who are looking forward to the generous holidays they've heard so much about is that they might have to wait a while before they can start enjoying them.

However the system isn't as strict as it used to be.

Thanks to the El Khomri labour law which was introduced in 2016, you can take time off pretty much straight away but the catch is it will leave you with less holiday for the following year.

“If you’ve just started a new job, you normally have to wait a year before you can take holidays,” explained Fabien Danjou, an employment law specialist in Montpellier. “However, you can take holiday time ‘in advance’, known as congés par anticipation, but if you take these days off in your first year of the job, you’ll lose them the following year,” he added.

Of course, your boss can refuse your request for time off. And disappearing off to Italy six weeks into a new job will probably raise a few eyebrows.

How many public holidays are there?

France has 11 public holidays a year, unless you’re lucky enough to live in Alsace-Moselle, where you get two extra days off on Good Friday (Vendredi Saint) and Boxing Day (La Saint-Etienne).

However, bank holidays are enforced by your boss and not the state, so the rules can vary from company to company. The only jour férié which everyone is entitled to by law is 1st May, unless you work in an industry like tourism or in a hospital, where work can’t be interrupted. If you’re asked to work on a bank holiday, your boss might offer to pay you more for that day or an alternative day off later in the year.

And if a bank holiday falls on a weekend? Bad news. Your employer is under no obligation to give you time off during the week to make up for it.

Do they really get the whole of August off?

This is something you'll hear time and again about France. And to be fair, much of the country – even the capital – does seem to shut down for the month of August.

While some of the French do indeed get a month off, this is linked to the fact that their office is closed during August and they are obliged to take it off. And yes, it eats into their annual holiday. You might have heard the French talking about taking an RTT. This is paid time off for people working more than 35 hours a week. And it’s in addition to your five weeks’ annual days off. It’s calculated by taking the number of hours you work per week and subtracting 35, so, if you work 39 hours per week, you get 4 hours of RTT per week.

However, if you work more than 39 hours per week, you should get paid overtime rather than get any extra RTTs. Your RTTs are fixed by your employer and not by law, so the rules can vary from company to company.

“In practice, most people don’t get RTTs because job contracts tend to be for a 35-hour week,” explained lawyer Fabien Danjou. So, even if most French people really do enjoy a 35-hour working week, those who spend extra hours at the office get compensated.

What about sabbatical leave?

The French may be generous with holiday time, but sabbatical leave is at the employer’s discretion, as well as being unpaid.

Higher-ranking public service employees are luckier. You can get up to three years’ sabbatical leave for personal reasons if you haven’t already taken time off to start a business or undertake professional training.

If you have a question about France or the French or just about life in France for foreigners then email us at [email protected] and we will do our best to answer it.