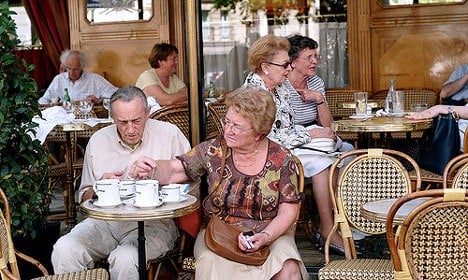 Many British pensioners in France have having to make big lifestyle changes. Photo: Susan Sermoneta/flickr

When the British pound fell to a two-year low last week, most headlines focused on tourists getting less holiday spending money, but for retirees in France the situation is far more serious than having to cut back on the ice creams on their annual break.

There is a large community of people in France who are reliant on some way in money from the UK. Some people work remotely for British companies, others get income from house rentals or dividends from businesses or shares, but the largest group are pensioners. Currency fluctuations of the pound have a massive impact on the lives of British pensioners in France. Photo: AFP

Many are not on high incomes anyway, so a drop in the exchange rate can take a significant chunk out of their monthly income.

And readers of The Local have been telling us how this has affected them.

Paul Trevor Bale, who lives in Aude in South West France, says he estimates his income has gone down around €150 a month.

He said: “I can’t make all the trips I want to, haven't been able to redecorate the house or buy rugs and furniture I need, or get help in my massive garden since a knee injury.

“I'm looking at all outgoings and cutting down on expenses as far as possible. I shop more carefully.”

Cheryl Bingham, who lives in Normandy on a combined state and private pension, said: “Our pension has decreased steadily from the referendum and we just have to tighten our belts all the time.”

Pat Hands said: “We do not go out for day trips like we used to or away at weekends. We remain in our village where we can walk when going out on errands, and use the car only when essential, for example appointments that are outside our own village.

“We have some savings but avoid at all costs dipping into them for everyday items. They are for emergencies only or if we had to go into a nursing home etc.”

Wendy Collier-Parker said: “We both have private and state pensions. It means that we are having to budget very carefully in order to pay our top-up medical insurance and mortgage and land and habitation taxes.

“We are watchful while shopping for the best deals. Think before planning a holiday until things are clearer, instead of going to a restaurant with friends have them in our house and have everyone bring something to share.”

For some it has meant putting off dreams of retirement.

Bryan Woy, who lives in Normandy, said: “Taking into account that over half of my retirement pension comes from the UK, I would say that my overall income has gone down by about 10 percent since the referendum.

“I am lucky enough to be able to continue to earn money in France, teaching and translating (until I become too old and tired). I probably work more than I would have done if the referendum result had gone the other way.”

And Ivan Robinson, who has emigrated to Oregon in the USA, pointed out that the pound has also fallen steadily against the dollar.

He said: “This is not only a problem in Europe, I am a permanent resident in USA and the loss from the pound to dollar is causing a definite hardship, the present drop in the pound equates for me two to three weeks grocery bills, resulting in a major drop in lifestyle.”

Meanwhile over the border in Spain, several British pensioners spoke of “becoming a recluse” since having to cut back on trips out and socializing.

And of course there was also some classic British humour deployed in a difficult situation. One respondent – we think jokingly – suggested taking up prostitution while Ivan Robinson added: “I have researched British war time recipes for cooking at home – amazing the different ways one can cook meals with Spam.”