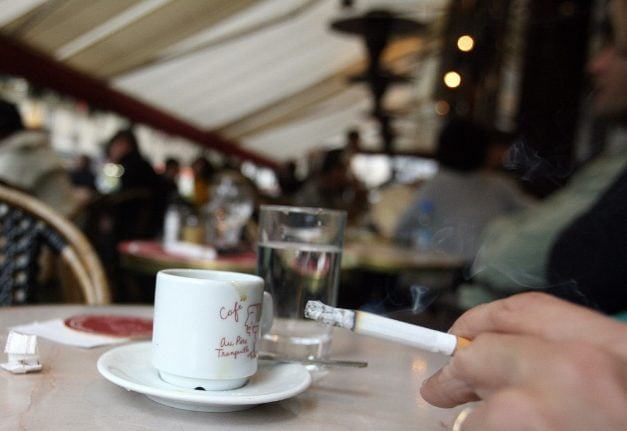 But smoking while sitting at said terraces has become quite polarising – what stands as an irreplaceable ritual and a vital slice of France for some is a hugely anti-social habit for others.

The possibility of a smoking ban on café terraces is up again for debate, after the research institute Opinion Way published a poll that said 73 percent of the French population was in favour of such a ban. Some businesses fear a ban will harm their custom. Photo: AFP

We asked some French people for their opinion, and let's say that there is often more to it than a simple 'yes' or 'no' answer.

Julia, a young Parisian, is indeed quite obliging when it comes to smokers on terraces: “As long as I am not smoked out to the point where I need to change seats or anything, I don't really mind.

“Though I keep in mind that passive smoking is a thing, so I try to avoid sitting close to smokers when I can.”

Jean-Pierre, a 54-year-old policeman from Brittany, while often bothered by smokers tries to put things into perspective.

He said: “When it is windy or when I am surrounded by smokers, it does become inconvenient and the smell of smoke is annoying me. But after all these years spent on patrol and regulating traffic during car accidents on the highway, I believe cigarettes smoke cannot be much worse than what comes out of exhaust pipes.”

Marcel, 77, is much less understanding but has his reasons: “I stopped smoking 20 years ago, but it is still tempting to have a ciggy with your morning coffee when you are surrounded by smokers.”

But most of all, Marcel worries for his grandchildren's health: “I have two grandchildren and the oldest has asthma – I want him to enjoy café terraces as much as anyone can, but his condition makes it harder for him, if not impossible, to be around smokers.”

But for Marc, a Paris bar owner, a smoking ban is simply out of question.

When asked what he thinks of a potential ban, he immediately frowns and mumbles: “Talk about pushing it! You already can't smoke inside, now they want to apply the ban on terraces as well? That is really nonsense, they would kill hundreds of businesses.”

Elisabeth, a 33 year-old saleswoman could not agree more with him.

She said: “I get that it can be unpleasant for non-smokers, but an actual ban seems like a bit of stretch. First café terraces, then it is going be the streets altogether – sounds like dictatorship to me!”

The research, carried out by professional pollsters Opinion Way for French anti-smoking group Droits de Non Fumeurs, also showed that 75 percent of the 18-34 year-olds and 77 percent of respondents aged 65 and over were in favour of bans or restrictions, creating a rather surprising consensus.

But regardless of the polls, some people will hold on to their cigarettes for as long as possible.

Pascal, a 50 year-old dry cleaner from Bordeaux said: “People really are a pain in the ass! If they do not want to be bothered by smoke, then stay inside the café and leave smokers be!”

Despite smokers' discontent, several French cities have already started taking actions on beaches such as Marseille, where smoking is banned on several major beaches or in parks, as in Paris or Nancy.