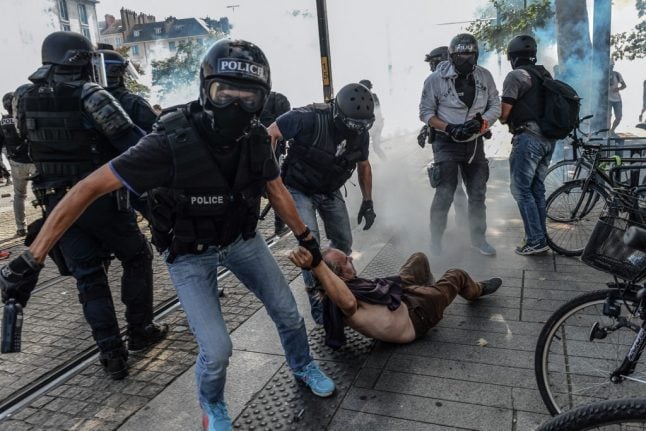 The crowd gathered in the morning, with emotions clearly running high, by the banks of the river Loire, where the body of 24-year-old Steve Maia Canico was discovered this week.

His body was found not far from where he was last spotted alive at an all-night event in Nantes on June 21-22, when officers used tear gas as they tried to break up the party and more than a dozen revellers fell into the river during clashes.

Near a portrait of the young man now known across France simply as “Steve”, the protesters threw flowers into the river while others held up placards with the slogans “Who killed Steve?” and “Where is the justice for Steve?”

This message echoed posters put up around Nantes during the month during which he was missing which simply asked “Where is Steve?”. Later Saturday some 1,700 protesters, of all ages, marched on the local police headquarters then the cathedral and chateau.

Some set up barricades, windows were broken and police responded with teargas and water cannon when projectiles were thrown and fires started.

Forty people were arrested for “acts of violence and carrying a weapon” police said.

Two people were injured, a police officer and a protester, according to police figures.

A medic at the scent told AFP that the injured protester was a 54-year-old man who had suffered a heart attack last month. The family of the dead man disassociated themselves from any violence and pleaded for calm, said their lawyer Cecile de Oliveira.

Among the protesters were mothers who said they feared for their own children of Steve's age, who also frequent music festivals.

Valerie, 53, dressed in black, was in tears as she shouted at police “take care of our children, protect them”.

Other protests were held throughout France on Saturday, notably in Paris, Montpelier and Toulouse, as part of the long-running weekly “yellow vest” demonstrations.

In the French capital around a hundred people paid homage to Steve, observing a minute's silence and leaving white roses.

The head of the national police's general inspectorate, Brigitte Jullien, denied having whitewashed the police action.

David Chantreux, head of the national police's enquiry unit said that a judicial enquiry has been opened into the death and witnesses were being questioned.