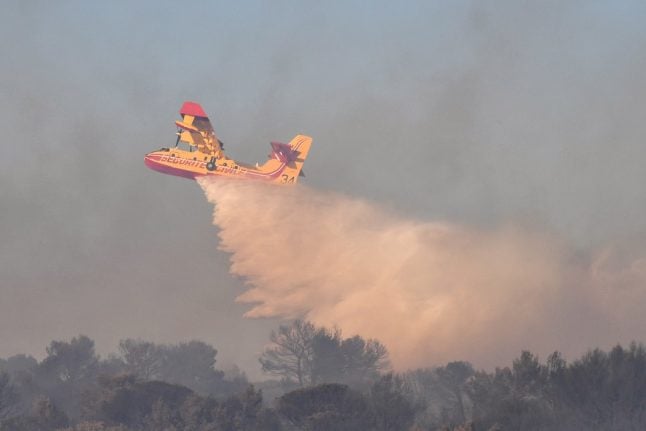 The accident happened at around 5:20 pm (1520 GMT) and an investigation was immediately launched, according to the regional prosecutor Eric Maurel.

Maurel said the fire — which has destroyed nearly 800 hectares (1,980 acres) of woodland, heathland and vineyards in the area around the village of Generac since Tuesday — may have been started deliberately.

“All my support for the pilots of the @SecCivileFrance, to all those who fight against fire, and to their families. #Generac,” he wrote in a tweet.

Interior Ministry Christophe Castaner expressed his “great sadness” and said his “first thoughts go to the family and comrades of this firefighter, committed to protecting us with infinite bravery.”

The national firefighters' federation also expressed their sadness, recalling that “risk-taking is in the very nature of those who help on a daily basis”.

The Tracker plane belonged to the Civil Security and is the smallest aircraft used to fight fires, carrying up to 3,600 litres of water.

Such accidents are extremely rare.

Among the most recent in France was when a Canadair plane crashed into the sea at Calvi on the island of Corsica in August 2005. The fire in Generac is still ablaze and being fed by strong winds, according to local fire commander Jacques Pages, who warned the situation could get worse on Saturday,

“It's criminal, that's for sure,” he told BFM television shortly before the plane crashed.

“Several fires started simultaneously and different sites. We're unable to cope. It's windy and it's hot.”

He told AFP that around 20 homes had been evacuated with Generac's chateau and school being used to accommodate people.

Late Friday, some 530 firefighters and around 100 gendarmes had been mobilised in the entire region of Gard, with 140 vehicles and four Canadair planes being deployed to tackle the fire in Generac alone.