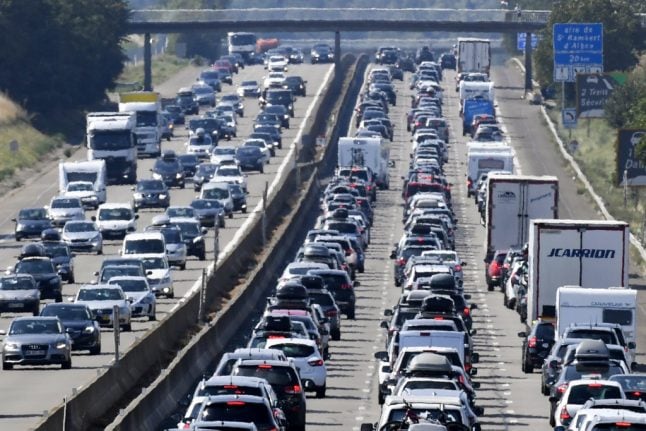 Bison Futé – the French government-run site that monitors traffic levels – has issued a traffic jam warning for Saturday for the whole country, saying that it will be the most difficult day of the summer for drivers.

Severe tailbacks are expected on Friday, Saturday and Sunday with the worst of the traffic predicted for Saturday morning which has a black warning – the highest level of alert.

Traffic on Saturday afternoon will still be heavy, especially in the south east of the country.

The difficult conditions are caused as two sets of holidaymakers cross on the roads.

The juilletistes – people who take their holidays in July – will be returning this weekend, while the August holidaymakers, or aoûtiens, will be setting off leading to a perfect storm of traffic.

Bison Futé has listed conditions across the country as “difficult” for Friday, Saturday and Sunday.

There are extra warnings in place for Saturday across the whole country, particularly in the morning, while the east and south east of the country are set to be very busy all day.

There is another warning in place for the weekend of August 10th, which is also a popular time for people to set off on holidays.

The Bison Futé website warned: “Saturday, August 3rd will be the most difficult day of the summer on all the country's main connecting roads.

“It corresponds to the crossfire between the juilletistes and the aoûtiens. Traffic will be extremely difficult on the vast majority of roads.

“It should be noted that throughout the weekend, traffic will be dense and often difficult on the Mediterranean arc between Italy and Spain, whether in the East-West or West-East direction on the A7, A8 and A9 motorways.
“Particular difficulties are expected on the A10 motorway near Bordeaux for the three days.”