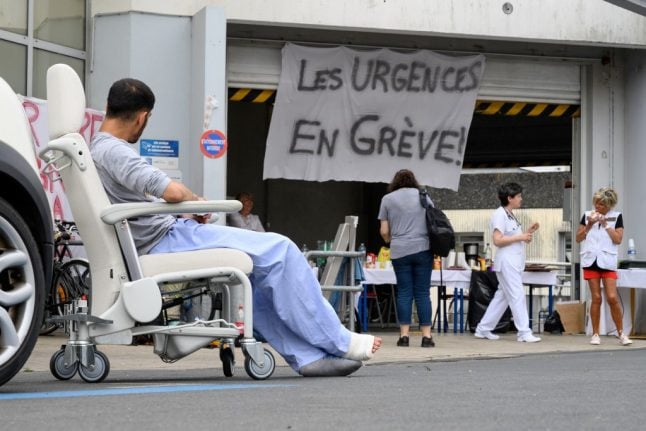 Staff at emergency hospital facilities across France have been staging industrial actions since mid March in protest at their working conditions and pay, but in recent weeks the movement has ramped up and now 213 facilities are affected by the action.

Health minister Agnes Buzyn accepted that “there is a crisis” when she visited a hospital in Verneuil-sur-Seine in Yvelines on Thursday. Staff have been wearing stickers declaring that they are on strike. Photo AFP

Staff – backed by three of France's biggest unions – are protesting over what they say are intolerable working conditions in A&E that are putting the safety of patients at risk.

A statement by the union Inter-Urgencies on July 31st pointed to the “absolute need to stop bed closures” as one of the main demands of the strikers.

They are also demanding an extra 10,000 staff for France's emergency departments and a €300 wage increase.

In an attempt to calm the anger of hospital staff, Agnès Buzyn had previously promised €70 million of aid, including €55 million dedicated to the payment of a monthly risk premium of €100 for staff, but unions say they have seen none of this. A demonstration on Bordeaux. Photo: AFP

There are strict rules around strikes by emergency staff in France, and police can even be called in if staff do not show up to work.

This has meant that at first strike action was limited to protests outside hospital entrances, and staff wearing badges to declare themselves 'on strike'.

However in recent weeks as anger has mounted staff have been increasingly calling in sick or not volunteering for overtime or extra shifts.

There have also been several symbolic five-minute walk-outs from departments while several cities have seen marches and demonstrations from medical staff.