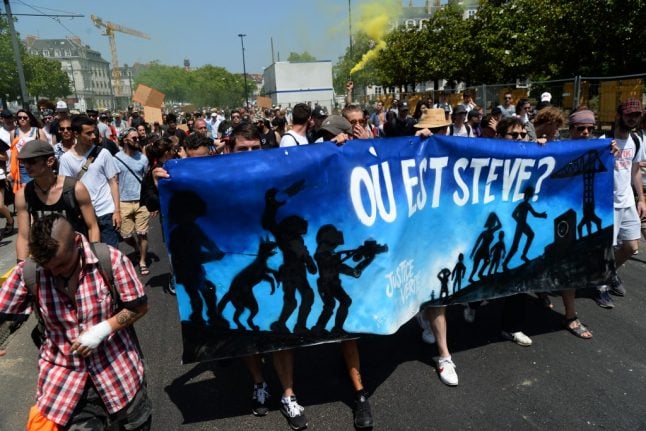 The question refers to Steve Maia Caniço, a 24-year-old teaching assistant who disappeared during the Fete de la Musique in Nantes in June. Thousands of people head to Nantes every year for the France-wide festival at the end of June, but this year trouble flared at the Nantes event. At around 4.30am police turned up at the Quai Wilson to demand that the music stop and people go home. Clashes occurred, tear gas was fired, police charged, panic ensured and in the mayhem several people ended up in the River Loire.

In all fourteen people fell into the water and Steve – who according to his family could not swim – has not been seen since that night.

Many were convinced that he was one of the ones who fell, and blame police for his death. On Monday July 29th police found a body in the Loire and it is believed to be that of missing Steve. So is this just an issue in Nantes?

No. There have been protests in Nantes over the police handling of the evening, but the mystery of his death has taken on wider significance.

Over the weekend a rally was held in Nantes, which Steve's family attended along with 700 others. They linked arms along the riverside walkway he is presumed to have gone missing from, and called for an investigation into police actions. Among the chants were cries of Où est Steve (where is Steve) and the hashtag then began trending on Twitter. Posters were also placed around Nantes.

The slogan “Where's Steve?” is now being used not just to reflect he anger over the handling of the festival in Nantes but it's tapped into a wider concern in France over police brutality, particularly linked to the recent 'yellow vest' protests.

A scandal also erupted earlier this month when French police were filmed teargassing climate change protesters, in footage that was widely circulated around the world. “What are the police doing!” reads this mural in Nantes along a with a giant portrait of missing Steve Maia Canico. AFP

Were the police brutal to the 'yellow vests'?

As is often the case, it depends on who you ask, but it's certainly the case that a lot of people have been seriously injured while taking part in 'yellow vest' protests including people who have lost hands and eyes as a result of the infamous 'flash grenades' used by police.

There was also the case of 73-year-old Genevive Legay, who ended up in hospital with severe head injuries after falling and hitting her head when police charged a march she was attending in Nice.

The police, on the other hand, say the majority of violence during the protests has come from the demonstrators, particularly the infamous 'black bloc' who were behind much of the violence, looting and arson that occurred in Paris.

In a sign of just how hostile the relationship between police and protestors became, some people on a demonstration earlier this year were hard to chant 'commit suicide' to police officers days after a report had been released showing the incredibly high suicide levels among the French police.

Well the investigation into Steve's death continues and until then, President Emmanuel Macron has appealed for calm from both sides.

He told Le Point: “We must keep in mind that if our police officers have been put in this situation, it is because there are also some of our fellow citizens who have been very violent and that is not acceptable.”

However the hostility sown during the months of sometimes violent 'yellow vest' protests means that this issue is unlikely to go away, even when we do find out what has happened to Steve.