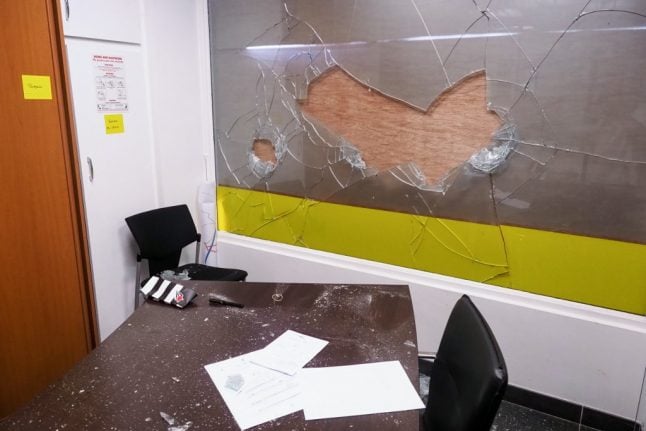 In an open letter published on the website of France Info public radio, 20 lawmakers from Macron's centrist Republic on the Move party and the allied MoDem party complained of MPs having their constituency offices “walled in or smashed” or their homes targeted.

“And some even gloat about it (the attacks), believing that social media allows any kind of spinelessness, cowardice or insult.”

Interior Minister Christophe Castaner has ordered stepped-up security around the homes and constituency offices of all parliamentarians after anti-government protesters attempted to set fire to the offices of an MP during a “yellow vest” demonstration in the southern city of Perpignan last weekend.

MP Romain Grau was in his office when a group of hooded protesters broke away from Saturday's march and began attacking his constituency office, first smashing all the windows and then tossing a burning object inside. Grau managed to extinguish the flames and escape unharmed. The attack is being investigated.

He was one of around 10 MPs targeted in the latest series of attacks, aimed mainly at those in Macron's party, some of whom received death threats and had their homes or offices targeted at the height of the “yellow vest” protests last winter.

The spark for the latest attacks was the adoption by the lower house of parliament of a huge EU-Canada trade deal on July 23.

The deal, which was championed by Macron despite fierce resistance from the left, the far right and some critics within his own party, removes tariffs on nearly all goods and services between Canada and Europe.

MPs who backed the treaty, which a poll Monday showed as being supported by only 26 percent of French voters, have been called out by critics on Twitter for voting “against the majority French opinion, the environment and future generations”.

After it was signed, farmers angry at a deal they say jeopardises the French beef sector, dumped manure outside the offices of a handful of MPs and walled up the entrances to the offices of two others.

Protesters also dumped hay bales marked “treason” and “liar” outside the offices of a farmer MP in the western Gironde region.

France's famously militant farmers have a long tradition of underscoring their demands by dumping farm waste or produce outside government buildings or politicians' offices.

The latest attacks and actions come at a time of growing hostility towards politicians which peaked during a winter of “yellow vest” protests, when at least 50 ruling party MPs were subjected to threats and abuse and several suffered attacks on their homes or offices.

The protests began over fuel tax hikes but quickly morphed into a broader, anti-political and anti-capitalist movement.

Aurore Berge, spokeswoman for Republic on the Move, warned on BFM television on Monday of growing attempts to “constrain MPs by force”, which she said was “not at all a democratic approach”.

Gilbert Collard, a European Parliament member from the far-right National Rally, told LCI television that “any attack on a politician, whatever his party or ideas, is an attack on democratic discourse.”