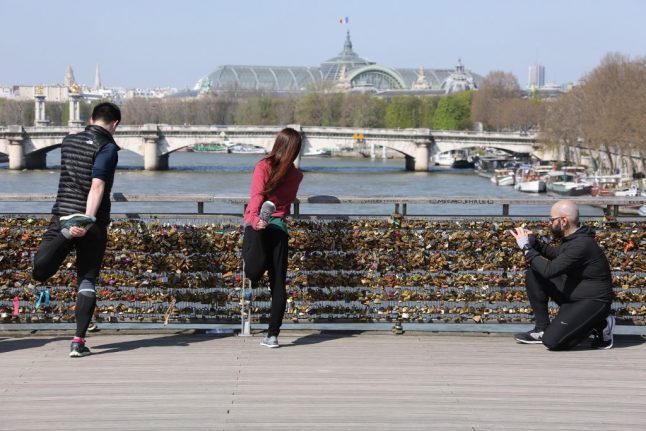 Here are some of our picks of the best ways to take some exercise.

For ease and efficiency, walking and running are the best options to get moving. If you’re a big walker, it’s easy enough to stay in the centre of Paris and cover a good distance easily. The banks of the Seine curve for 27 kilometres through the centre of Paris from the Bois de Boulogne to the Bois de Vincennes and several sections are car free.

READ ALSO: Sex, steps and vegetables- How to keeping fit like a Parisian There are a few places to dart off for some new scenery en route too. The Jardin des Plantes in the 5th arrondissement is a stone’s throw away from the river and is always decorated with seasonal flower displays, plus there are even some animals to see. Other parks include the Buttes-Chaumont and the Jardin de Luxembourg, although a bit further out from the centre.

For those wanting to take it a step up, the running scene in Paris is a hive of activity. The Bois de Vincennes, the Bois de Boulogne and the Buttes-Chaumont are the must-try places.

The Seine can be popular for running, although in summer evenings the banks can be crowded with people making the most of the sun over bottles of wine and, if you’re a starter runner, the big crowds can be intimidating. The Bois de Vincennes is home to many Parisian sports. Photo: AFP

Flanking either side of Paris, making your way over to the Bois de Boulogne or the Bois de Vincennes is your best option. Both parks make up large parts of the Paris Marathon route and at any time of day you’ll be alongside runners of all levels, from beginners managing a few minutes before having a rest to professional athletes bombing around the trees.

Sticking around the Fondation Louis Vuitton (Metro Les Sablons) is a good idea in the Bois de Boulogne, and it’s best to get your run in before nightfall as the park does have a bit of a bad reputation after-hours.

In the Bois de Vincennes, it can be easy to get lost. For beginners, laps of the Lac Daumesnil is a good option and if you do want to venture further, head to the Allée Royale in the park’s centre. Elsewhere, the Buttes-Chaumont is more central and a running hotspot, although its hilly terrain may leave you out of breath. If you want a goal to aim for, Paris has many charity fun runs like La Parisienne or the Odysséa (or even go for the Paris Marathon if you fancy it!).

Cycling in Paris is also popular. Investing in a bike or using a Velib’ to get to work is a great way to involve exercise in your daily routine, plus you can avoid the crowded Metro commute. If you're looking to get on your bike of an evening or weekend, all the parks have good cycle lane options, although it won’t take you too long to get around them. If you’re looking for a bigger ride, heading out towards the West of Paris is popular among cyclists.

If you can't afford expensive gym membership, Paris is full of ‘Calisthenics Parks’ which provide free workout machines. They are just about everywhere, but you can find a comprehensive list here. Home of the French Open, tennis is one of Paris’ most popular sporting choices too. There are 39 sports centres with courts you can book out in Paris. Make the most of swimming pools like the fabulous Joséphine Baker open air pool or Butte Aux Caillés if you’re more of a water fan.

For those who like a group vibe, there are hundreds of sports clubs taking place over the city. Just about anything you can think of, including yoga and Pilates, will have a group ready to welcome you. Websites such as Meetup are great for getting in touch.