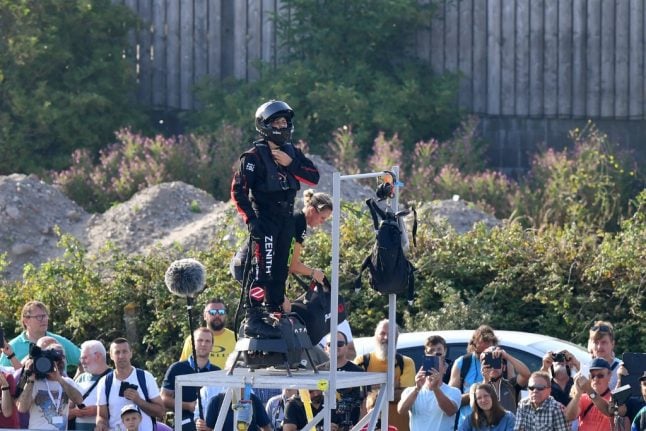 Franky Zapata, 40, a former jet-skiing champion who designed and built his stand-up flying platform, took off from Sangatte on the northern French coast just outside Calais. He planned to land in Britain around Dover after a 20-minute flight.

But the daredevil attempt ended in failure when Zapata attempted the difficult and technical task of refuelling on a platform in the middle of the Channel. He missed the platform and fell into the water before being rescued.

His team said they were “incredibly disappointed” that he didn't succeed but said it came down to a matter of millimetres as his flyboard touched the platform but he couldn't quite land.

One of his team members told BFM TV that “physically he was fine” after being rescued but that he “was very very annoyed” at having failed to make it across the Channel.

I'm sure the next attempt will see a successful landing. #innovation #technology #Transportation #FrankyZapata https://t.co/0yTZqRC7PZ

The device, which can reach speeds of up to 190 km/h, is powered by five small jet engines and controlled by a handheld throttle, which Zapata activates to take off after strapping himself into a pair of boots attached to the board.

Ahead of his attempt planned to commemorate 110 years since Frenchman Louis Blériot became the first person to cross the Channel by plane – he had practised on his device on countryside around Saint-Inglevert in northern France.