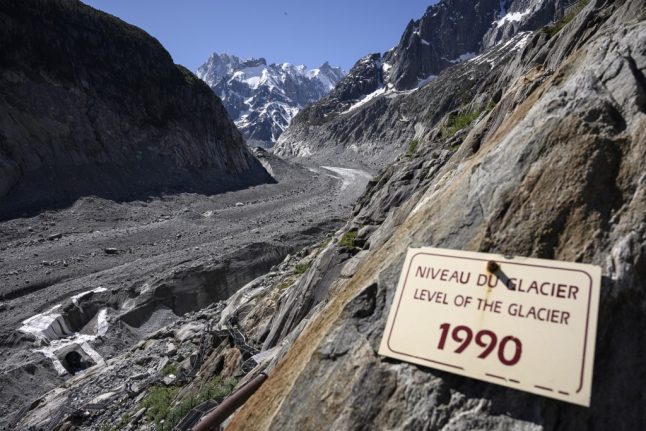 Visitors arriving from the last tramstop before the 4,809-metre summit are forced to take 20 steps more each year to reach the retreating “Mer de Glace”, or Sea of Ice glacier, France's largest.

Now the ice has shrunk far below. Older visitors who return can recall a time when they could touch the ice just outside Montenvers tramstop near the summit. On the glacier itself, the once immaculate pristine surface is now depressed and greyish. A grotto visible through the glacier's blue frozen mass lit up with festive lights like a nightclub has become a popular stop for tourists.

Now workers have drapped white tarpaulins held in place with large stones over the ice tunnel in a bid to protect it from the sun. And mountaineers on the surrounding peaks follow a new ritual.

Over the sound of mountain water, they stop more often to listen for the clatter of falling rocks on Europe's tallest peak. The damage is increasingly clear from rockfalls that scar the mountainside and damage routes used by climbers visiting Mont Blanc.

Most spectacular of these rockfalls affected the Bonatti pillar, a massive rock column named after Italian climber Walter Bonatti, that collapsed into a cloud of dust in June 2005. During the 1970s, the famed French alpinist and mountain guide Gaston
Rebuffat noted Mont Blanc's hundred finest routes. Half a century later, a team of researchers analysed snow conditions, ice and rock state, accessibility and risks on 95 of Rebuffat's routes.

The study published in June by Jacques Mourey, a doctoral student at the EDYTEM laboratory at the University of Savoie Mont Blanc, found 93 affected by climate change, 26 of which were severely impacted and three no longer existed.

Among the changes that made these routes more complex and technically challenging are the appearance of bedrock, more fragile snow and ice and widening of crevasses.