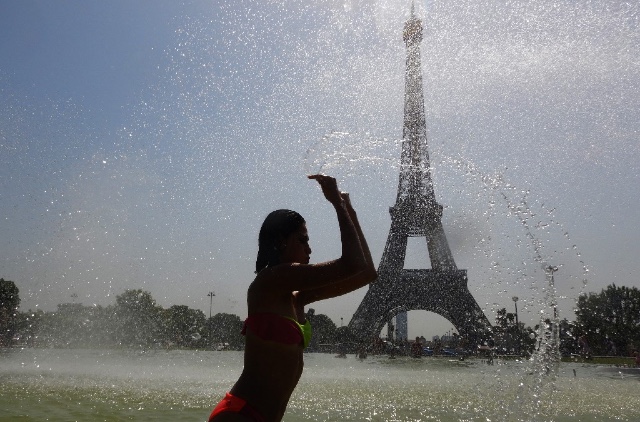 Méréo France recorded a temperature of 42.6C at 4.32pm in Parc Montsouris in the 14th arrondissement, breaking the previous record of 40.4C which was set back in 1947.

That meant Paris has recorded a highest ever temperature above those held by southern European capitals like Rome, Madrid and Lisbon (see tweet below).

Just to put today's all-time high temperature in Paris in context… 42.6C is hotter than the highest temperature ever recorded in Rome, Madrid and Lisbon! https://t.co/lSBhGEdtv4 pic.twitter.com/bA6fcDppUM

Météo France has predicted that records will tumble across the country today, with Troyes, Rouen Lille and Dunkerque all recording records so far and more expected to follow.

But it is unlikely that France's all time record – set at the end of last month – will fall.

That record was 46C and was set in the southern département of Herault.

Paris is one of a number of départements placed on red alert for the extreme heart, with the public warned to take precautions to avoid health risks.

The government is urging people to use extreme caution – stop excessive physical activity, drink plenty of water and if possible not go out during the hottest part of the day.

The city of Paris activated its emergency heat plan earlier in the week with cool rooms, water fountains and keeping parks open overnight.

A group of children at a holiday camp just outside Paris have been hospitalised with heatstroke.

The children were at a camp for the children of SNCF employees at  La Garenne-Colombe when they fell ill on Wednesday night.

Six children were taken to hospital while another 13 were treated at the site by emergency crews, before being taken to an air conditioned location.

Captain Lointier of the Paris Pompiers said: ” The children all had a medical examination first to check their vital functions.

“That is, we listen to the heart and breathing and check their vital signs. Then we tried to cool them down. To do this, were are sprayed with water for 5 to 10 minutes, making sure that the water is not too cold to avoid any thermal shock.”