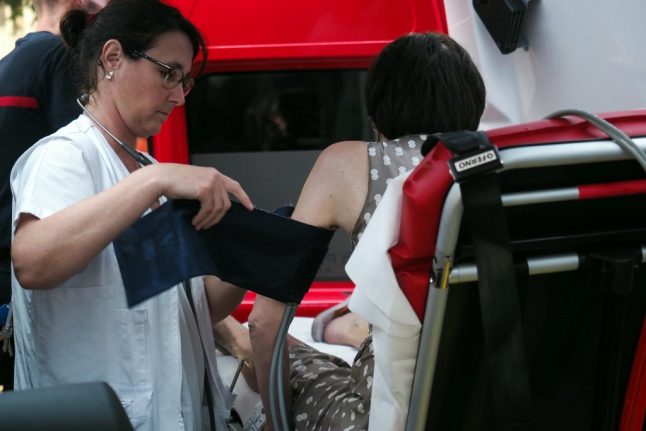 The heatwave is set to reach its top temperatures on Wednesday and Thursday, with highs of 46C expected in the south, and 41C in Paris. Bordeaux has already broken its all time record for heat – recording a temperature on 41.2C on Tuesday – and weather forecasters expect more records to tumble on Wednesday and Thursday.

And emergency services are braced for a spike in cases of heat related illnesses, with doctors warning of the cumulative effects of prolonged exposure to heat.

Serge Smadja, Secretary General of SOS Médecins, told Le Parisien that Thursday was expected to be a “complicated day” for ambulances and hospital emergency departments.

He said: “There is inevitably a cumulative effect, especially for fragile people. The repetition of these episodes is always a little more dangerous.”

A second heatwave so soon after the one at the end of June did not allow people's bodies to recover, he added.

Across the country the effects of the heatwave are increasingly being felt. In Paris authorities have again activated their emergency heatwave plan, which includes keeping a number of the city's parks open overnight, installing cool water misters and opening 'cool rooms' for people overcome with the heat.

A total of 80 of France's 96 mainland départements were on heat alert on Wednesday.

As the Tour de France reached its final week in the southeast of the country, ice foot baths and extra water points were on hand to avoid dehydration.

“In the third week of the Tour de France, I think heat like this could make the difference,” said Davide Bramati, head of sport for team Deceuninck, whose cyclist Julian Alaphilippe is currently leading the world-famous race.

French energy company EDF said it would temporarily shut down the two reactors at its Golftech nuclear power plant this week in the southern Tarn-et-Garonne department, in a bid to limit the heating of water used to keep reactors cool.

Reactor number 2 shut down on Tuesday evening and number 1 will shut on Wednesday, with both due to stay shut until July 30.

France is gearing up for a surge in electricity use this week, but the national electricity board said Monday that there will be enough supplies.

The government outlawed animal transportation “for economic reasons” between 1pm and 6pm in areas affected by heat alerts.

The heatwave has also caused water shortages in dozens of regions across France, with a drought raising concerns for farmers producing crops from potatoes to grapes.

In the Vosges mountains of eastern France, farmers have been forced to let their cattle graze pastures on what are ski slopes in winter in order to feed them.