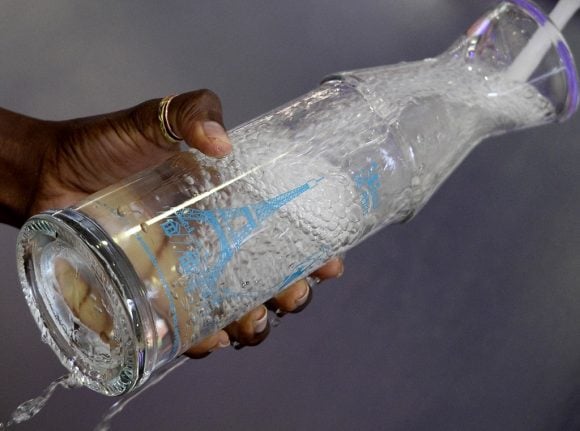 In a viral message spread on the WhatsApp messaging app last week, a woman presenting herself as a nurse from a hospital in Paris can be heard telling people not to drink water from the tap because of the presence of radioactive “titanium”.

Other rumours spread that authorities were asking people to stop drinking from the tap.

Alarm reached such levels that hospitals and public health bodies were inundated with calls, while the water authority in Paris put out a public message on social media at the weekend reassuring Parisians that “drinking water poses no threat”.

“There is no problem with the water, it is excellent for everyone,” the head of the health body for the capital region, Aurelien Rousseau, added on Saturday in an interview with AFP.

Investigators in the Paris prosecutor's office have now opened an investigation into the crime of “publicising, spreading and reproducing false information intended to cause public disorder,” a judicial source told AFP on Monday.

Like many rumours spread on the internet or messaging apps, the story contained a kernel of truth that was distorted or deliberately manipulated to raise alarm.

Last Wednesday, a small environmental charity called the Association for the Control of Radioactivity in the West (ACRO) published a report claiming low levels of the radioactive isotope tritium had been found in drinking water.

The group said in a statement that “6.4 million people are supplied with water contaminated with tritium”, which is a byproduct of the nuclear power stations that provide the majority of France's electricity.

But the group itself acknowledged that none of the readings it had seen for tritium were above the European guidance level of 100 Becquerels per litre – a Becquerel is a measure of radioactivity.

The World Health Organization sets 10,000 Becquerels per litre as a maximum level.

The public water provider in the Paris region, SEDIF, told AFP that the average of its readings showed a level of 9 Becquerels per litre.

David Boilley, a physicist who heads the ACRO environmental charity, said that his intention was to raise awareness about low levels of tritium pollution which could indicate the presence of other unspecified radioactive pollutants.

“Our intention was not to make people panic, but to create a debate,” he told AFP.

A scientist at the public Institute for Radioprotection and Nuclear Safety, IRSN, stressed that low levels of tritium posed no health danger and that people were exposed to radiation throughout their lives, including in sunlight.

Jean-Michel Bonnet said that someone who drank two litres of water a day for a year containing 10,000 Becquerels per litre of tritium would consume the same amount of radiation as as they would in a Paris-Tokyo flight.

“The current situation does not require any particular attention,” Bonnet, who is head of public health at IRSN, told AFP.

In March this year, an internet hoax spread around Paris claiming that kidnappers in white vans were abducting children, leading to what one official called “collective hysteria” and near-lynchings of Roma people.

Dozens of people were were arrested after gangs of vigilantes attacked camps of ethnic Roma people in northeast Paris after false reports that they were responsible for a string of abductions.

The violence, which echoed similar incidents from India to Brazil and Mexico in recent years — underlined the difficulty for governments in controlling the flow of false information in today's hyper-connected world.