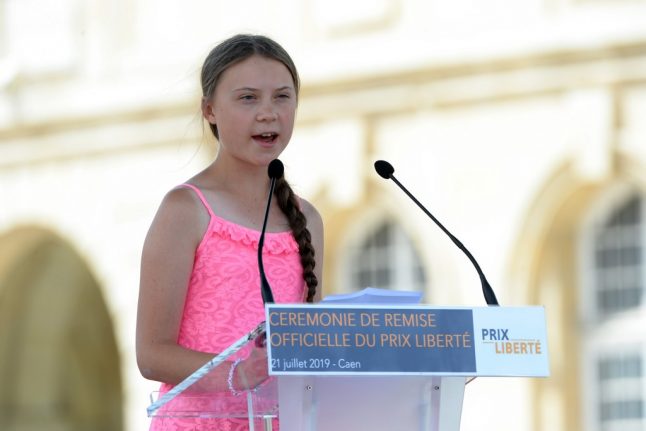 Thunberg, whose school strikes protesting government inaction over climate change helped sparked a worldwide movement, was dismissed as a “prophetess in shorts” and the “Justin Bieber of ecology” by some deputies ahead of her appearance at the National Assembly.

The 16-year-old had on Friday won the praises of German Chancellor Angela Merkel and on Sunday received a €25,000 prize presented by World War II veterans in northern France.

READ ALSO Paris will be as hot as Australian capital Canberra by 2050, say scientists Greta Thunberg receives the Freedom Prize in Normandy at the weekend. Photo: AFP

But deputies from the right-wing opposition Republicans and far-right National Rally lined up to condemn the invitation to visit parliament from a cross-party group of 162 MPs.

Republicans MP Guillaume Larrive called on MPs to boycott her appearance, saying that to fight climate change “what we need is scientific progress and political courage, not apocalyptic gurus”.

Julien Aubert, like Larrive a Republicans MP contending for leadership of the party, snapped: “Don't count on me to applaud a prophetess in shorts, a Nobel Prize for Fear.”

The comments were met with dismay by opponents in parliament.

“They are playing an internal game on the back of the battle against climate change,” said Delphine Batho, head of the Generation Ecology party.

The state secretary at France's education ministry Gabriel Attal said no-one would question Thunberg's right to appear if she was 30 years older.

“Her youth makes some forget that she started a historic movement,” he said on Twitter.

President Emmanuel Macron has sought to convince young voters in France he is a champion in the fight against climate change.

But even some within his own ruling party Republic on the Move (LREM) were sceptical about her appearance.

“It's a sad symbol to have a strike at school,” said MP Sylvain Maillard, saying he was “ill at ease about creating an icon at the expense of scientific  reflection”.

Thunberg's appearance will come as France again swelters in a new heatwave with record high temperatures expected in Paris on Thursday.