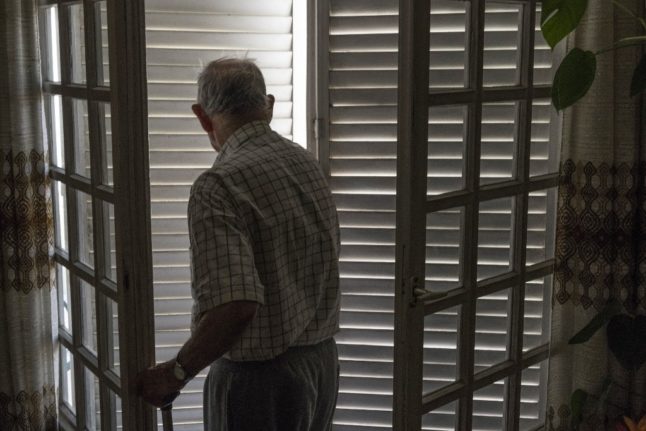 Shutters are your friend during the hot weather. Photo by Thierry Zoccolan / AFP

The main danger is sunstroke and dehydration and those classed as particularly vulnerable are children, the elderly and people with long term health conditions. People who work outside in physically demanding roles can also be at risk during periods of extreme heat.

For the rest of the population, the high temperatures are unlikely to be dangerous, but can be pretty uncomfortable.

Air conditioning is a rarity in French homes, but there are plenty of other techniques to ensure that you stay cool.

Stay inside
Try and avoid going outside between the hours of 11am and 9pm, particularly the late-afternoon period when the day’s temperature is generally at its highest.
If you need to go out, then be sure to wear light clothes, preferably cotton or linen as it lets your skin breathe. It’s not a bad idea to take a parasol or a hat to keep your face and neck in the shade.
Shut the shutters or blinds
On the home front, keep the blinds closed throughout the hottest hours of the day. If you have shutters, keep them closed during the day.
It may seem counter intuitive to keep everything closed, but one of the main reasons that French homes have shutters is to keep you cool in the summer. (The other is to keep you warm in the winter)
When the temperature drops in the evening, open the windows and doors to get some fresh air in.

Go out in the early morning

It’s important to get some fresh air, but consider going out for a walk in the early morning or at night once the temperature has dropped – this also applies to dogs, so consider switching your pet’s normal walk time to a cooler time of day.

In the cities, many authorities keep parks open all night during periods of intense heat, so you can go out and enjoy the fresh air and cooler temperatures at night.

Stay in the coolest parts of the house
Be sure to find the coolest part of the house and make sure that’s the area you stay in. Most private homes don’t have air conditioning, but investing in an electric fan is a good way to stay cool, most electrical and homewares stores sell them.
If your place is just too hot and stuffy then you’re advised to head somewhere like a cinema or a shopping centre that has air conditioning or just a cool building like a church.

It might sound obvious, but be sure to drink plenty of water – even when you’re not thirsty. It’s recommended that you drink at least somewhere between 1.5 and 2 litres per day.

And to avoid dehydration stay off the alcohol, yes that even includes rosé wine with ice in it. Eat plenty of fresh fruit and salad vegetables.

Douse yourself in water

Cold showers or a swim are great, but there are plenty of other ways to cool down. Filling a bucket with water for your feet or placing a wet or damp towel on your head and shoulders can make a big difference. The French are keen on facial misting sprays, which are sold in most supermarkets and pharmacies.

If you’re in a city feel free to use fountains or water features to cool down, unlike in Italy where tourists have been prosecuted for jumping into fountains, in France authorities will turn a blind eye if it’s hot.

Get rid of the extra heat

If you’re at home, turn off the big lights, only use your laptop if you have to, and eat cold meals rather than using the oven – although the health ministry also says that you should make sure to eat regular meals. It’s easy to lose your appetite in the heat, but not eating enough will make you feel faint.

Limit your physical activity
It’s best to avoid major physical exertion during the hot weather – if you’re keen to carry on running or cycling do it early in the morning or late at night when it’s cooler – and even going outside to do the gardening is unadvised.
Getting up to refill your pitcher of iced lemonade is OK.

Be careful what you drink

Tea, coffee, and alcohol all act as diuretics, meaning it will leave you dehydrated. Stick to water.

Your pets also suffer from intense heat, so make sure you think of them too. Be sure to keep an eye on them, give them plenty of water, and the occasional cool bath and (for dogs) walk them during the coolest part of the day.

Be aware of the risks

Heat is dangerous and every year people die during heatwaves – France is increasingly seeing unprecedented temperatures during the summer months and this is only likely to get worse as the climate crisis intensifies.

Remember that children under the age of four and the elderly are the most at risk when the heat strikes.

If you have elderly or unwell neighbours, be sure to check on them – many city authorities are running a scheme where vulnerable people can be transported to ‘cool rooms’ in the city.

If you or someone close to you is complaining of cramps, headaches, dizziness, or has a fever of over 38C, this is a clear sign they’re suffering from the heat. Keep the person cool and call emergency services for help.

After a week of scorching temperatures France’s heatwave has now broken and Météo France has issued storm warnings for much of the country.

The first affected areas are predicted to be in the south of France, where some areas could see up to 40mm of rain in an hour and winds of up to 100km/h.

READ ALSO Storms and high winds: What can we expect from the weather in France this week?

Paris is only under a yellow alert, but when the rain hit late on Tuesday afternoon it was extremely heavy, leading to flash flooding in some streets and Metro stations.

At least 26mm of rain fell in a single hour, according to the weather station at Parc Montsouris, while estimates for the entire duration of the storm are 44mm.

Meanwhile the weather station on the Eiffel Tower registered gusts of wind of 104km/h.

At least eight Metro stations were temporarily closed because of the flooding in the stations, although there do not appear to be any stoppages on any Metro lines, the airport link OrlyVal was briefly halted.

Météo France does not expect major flooding in the Paris region.

When the deluge starts BUT the creche is conveniently situated next to a wine bar… #parislife pic.twitter.com/Y3zcC1NrBx

Unfortunately the storms are unlikely to alleviate France’s drought – the worst in 60 years – since water from sudden downpours tends to run off parched land, rather than soaking in. 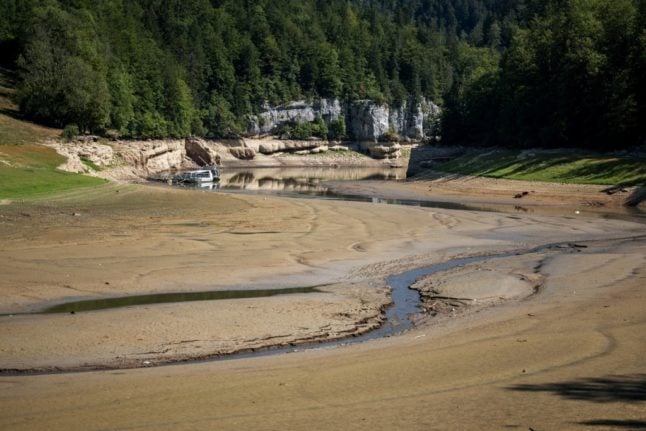