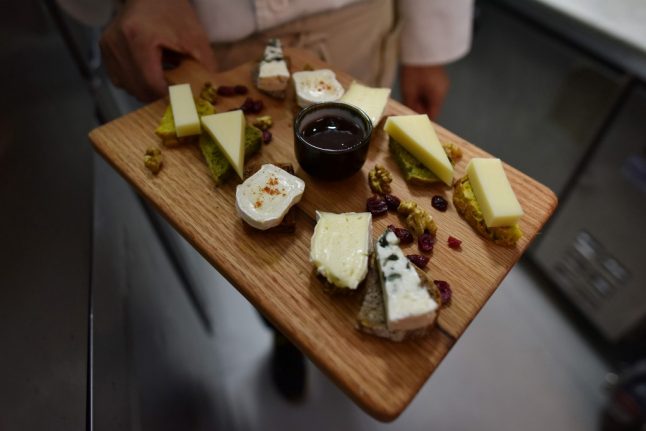 Today it's thought that there are nearer 1,000 different types of cheese in France, grouped into eight types, and each region is fiercely proud of its fromage traditions.

For our daily dilemmas poll we selected Roquefort, a southern classic and the daddy of all blue cheeses, to go head-to-head with Normandy's most famous export – Camembert. Roquefort being aged in caves at Roquefort-sur-Soulzon. Photo: AFP

So two very different types of cheese from the soft and smooth Camembert to the more muscular Roquefort – and a hands down victory for the northerner.

Living in France: Daily dilemmas. If, by some terrible stroke of fate, you were only allowed to eat one French cheese – which one would it be?

While on Facebook 62 percent of people said they preferred Camembert, although there were a lot of supportive comments for the defeated Roquefort.

Shane Thomas commented: “Roquefort with a glass of gewurtz Is a match made in heaven!”

While Marc Lassort added: “Finally – a page that gives full credit to Roquefort!”

Meanwhile many people went for the best option – both.

While Roquefort may have lost the poll, it can console itself that it has the most romantic origin story.

The tale goes that a young shepherd boy left his lunch of bread and sheep's milk cheese in a cave while he pursued a local girl he had fallen head over heels in love with. When, many months later, he came back to the area he found his lunch still in the cave and the cheese transformed into a strong-tasting blue by the growth of mould.

While this sounds a little unlikely (surely anyone who found abandoned, mould-covered food would just bin it?) it's certainly true that all Roquefort is still produced in the Combalou series of caves near the village of Roquefort-sur-Soulzon in south west France.

Cheesemakers say the caves' special combination of a cool damp atmosphere and drafts running through the cracks in the rock encourage the perfect mould growth to give the cheese its distinctive flavour.

The sheep's milk cheese has been made in the region for centuries, but it was given a royal charter by  King Charles VI on June 3rd 1411.

The caves are open to the public and you can have a guided tour, watch the cheeses go through the famously strict maturing process and, of course, enjoy a tasting session. Camembert is a relative youngster in the French cheese scene, not appearing in written records until the 18th century.

However it has rapidly made up for lost time, becoming one of the most widely sold French cheeses on the market with almost 70,000 tonnes sold every year.

In order to qualify for the Normandy label it must not only be made in Normandy, at least 30 per cent of the milk used in it must come from cows that have been grazing on Normandy's famously lush grassland.

You might think it tastes basically the same as Brie, but it's probably best not to mention that in Normandy which is fiercely proud of its local product. Brie, on the other hand, is generally produced in the Seine-et-Marne area.

As well as the location, Brie differs from Camembert in that it's generally made in big wheels and served in slices, while Camembert is ripened whole, which gives it a stronger taste and smell, although both cheeses could politely be described as 'aromatic'.

FRENCH BUREAUCRACY
Everything you need to know about your vital French ‘dossier’
Url copied to clipboard!