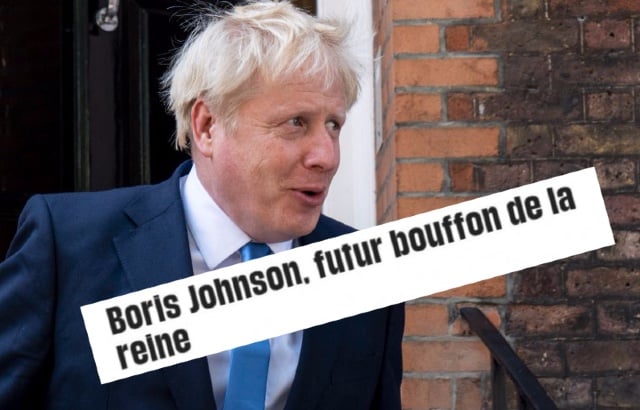 Press and politicians in France reacted on Tuesday as Johnson was confirmed as the winner of the Tory leadership contest, and therefore Britain's next Prime Minister.

In a result announced in London on Tuesday afternoon, Johnson was confirmed the winner with 92,153 votes, beating Foreign Secretary Jeremy Hunt who took 46,656 votes.

Current Prime Minister Theresa May had already announced that she will step down on Wednesday, ushering in the reign of controversial former journalist Johnson.

Only members of the British Conservative party were eligible to vote in the leadership contest – a total of 159,320 people.

Johnson himself has never been shy of a bit of French bashing – who could forget his infamous 'turds' comment when he was Foreign Secretary?

And the French have not held back on their opinions of him. On Tuesday the media and politicians gave their views on the new leader of Britain and some of them were far from flattering.


How Johnson is seen across La Manche. Photo Libération

Leftwing daily newspaper Libération describes him as “a liar, self-centred, obsessed with money but appreciated for his eccentricity and self-derision, the former mayor of London, who became a Eurosceptic to stand out from the crowd” in an article headlined 'Boris Johnson, future Queen's jester'.

Radio station France Info is equally unsparing, while conceding that Johnson is “certainly very clever” they describe him as someone who has “a history of incompetence and is known as a buffoon”.

LCI TV channel were more concerned by the potential alliance between Johnson and US President Donald Trump which they described as “unwanted”.

“Should we be scared of Boris Johnson?” LCI asked.

LCI pointed out that Trump and Johnson had much in common, including the fact they were both born in New York, both have bad hair cuts and both have launched stinging attacks on Hilary Clinton in the past.

The channel said the similarities don't stop there. They have both been accused of racism recently and of pushing fake news and lies in the media. And newspaper Le Parisien points out that although Johnson is now running on an anti EU ticket, he himself is French, or at least partially.

His grandmother was half French, born in Versailles and with roots in the Alsace region of France – hence his middle name of de Pfeffel.

Meanwhile Le Monde – the heavyweight French daily paper known as the newspaper of record – has republished an editorial simply saying “Boris Johnson leading the UK? No thanks!” `

In the political world, words were more measured, with French president Emmanuel Macron congratulating Johnson on his win.

“I congratulate Boris Johnson and I will call him when he is officially prime minister,” Macron said.

“I want very much to work with him as quickly as possible and not just on European subjects and the continuation of negotiations linked to Brexit, but also on international issues on which we coordinate closely with Britain and Germany… like the situation in Iran,” he added.

The incoming European Commission president Ursula von der Leyen, who was in France having a working lunch with Macron at the Elysées Palace, congratulated Johnson, but warned they had “challenging times ahead.”

“Congratulations to Boris Johnson for being nominated as prime minister. I am looking forward to having a good working relationship with him.

“There are many different and difficult issues to tackle together. We have challenging times ahead of us.”