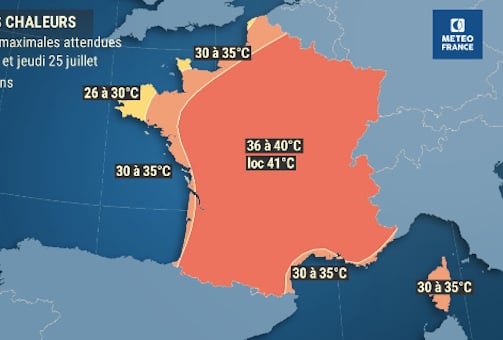 France is set to experience yet another heatwave across most of its metropolitan territory, with temperatures expected to be “at least as intense” as June’s extreme weather conditions.

“As of Sunday, a mass of hot air from Spain will reach the south-west of France,” Météo France warned.

“The heatwave that is too much,” said the headline in the Le Parisien daily on Monday, highlighting that “Act II” of this summer's severe weather would further hurt production of crops from potatoes to grapes.

“We are forecasting 41 or 42 degrees in Paris on Thursday and there is the strong chance of beating the record,” he added.

From Monday July 22 the air will get increasingly hotter across the entire country.

When exactly temperatures will drop “remains unclear” at this point, but France’s national weather agency believes the heatwave will last “three to four days rather than the six days of June’s heatwave”.

Scorching temperatures are however expected to linger on the longest in the south-east: 5 days. Other sources suggest the intense weather could stick around for up to 15 days.

France’s La Chaine Météo weather channel is slightly more optimistic about the heatwave in that they forecast that this latest episode of extreme weather wont’ be as “intense” as June’s heatwave.

Maximum temperatures will range between 30C and 35C in the northern half of France and hover around 35C to 40C in the south west of the country. By Tuesday the mass of hot air will have spread throughout the north of the country as well, pushing maximum temperatures up to 40C across most of l’Héxagone. The mercury will peak at around 40C in much of France's interior, with average temperatures rising again in eastern France.

Wednesday is set be the hottest day overall during this upcoming heatwave.

Brittany is the only region where the air won’t be stifling, staying below 30C in most of the region. Although French meteorologists aren’t 100 percent certain how long this new heatwave will last, they are forecasting that a cold front blowing in from the Atlantic will reach Brittany on Thursday and (hopefully) the rest of the country by Friday June 26.

The stormy weather will bring with it a temperature drop for the western half of France, where the mercury is likely to drop below 30C.

Eastern France however will be hot and humid, with temperatures likely to linger in the high thirties despite the rain.

Where will the heat be most unbearable?

Although much of France will melt under the sun in the days to come, the central and eastern regions of Bourgogne-Franche-Comté, Auvergne-Rhône-Alpes and Centre-Val de Loire will bear the brunt of the heatwave, with maximum temperatures of 40C and 41C on Wednesday, Thursday and possibly Friday.

The mercury could also hit 40C in Paris by Wednesday, meteorologists have warned.

During June’s heatwave a north-eastern wind managed to keep the air slightly cooler in the French capital (36.5C) compared to temperatures in the rest of the country. This time there won’t be a breeze to “protect” Paris.

The last time the 40C threshold was surpassed in the ‘City of Light' was in 1947.

It also hasn’t rained in Paris since June 21, a record for this time of year.

It’s worth sparing a thought for the southern departments of Gard, Hérault and Vaucluse, as they haven’t experienced midday temperatures below 30C in a month.

A total of 67 departments are already on drought alert, and the upcoming canicule (heatwave in French) is only expected to diminish water tables even further.