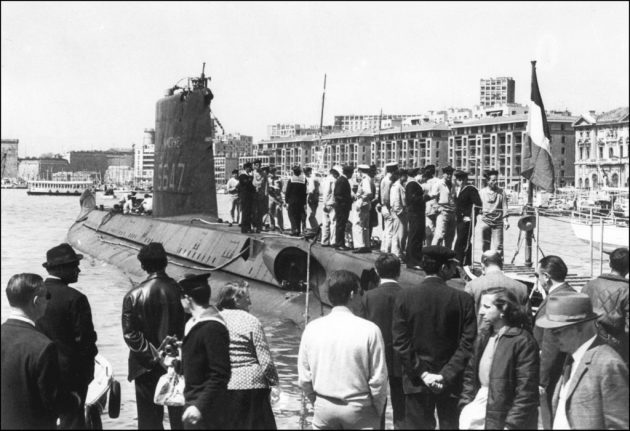 The submarine Minerve pictured in Marseille in the late 1960s. Photo: AFP

“It's a success, a relief and a technical feat,” Parly wrote on Twitter as she announced the discovery of the Minerve submarine which was lost near the French port of Toulon off France's south coast with 52 sailors on board.

“It's a success, a relief and a technical feat,” Defence Minister Florence Parly wrote on Twitter, after the wreck was discovered off the southern French port of Toulon. “I am thinking of the families who have waited for this moment for so long.”

The Minerve submarine was lost off France's southern coast with 52 sailors on board on January 17, 1968.

Despite multiple search efforts over the years, it had never been found.

Parly announced a new search mission at the beginning of 2019, backed by the latest technology and naval vessels, following fresh demands from the families of deceased sailors to find the remains of their loved ones.

Tides and currents in the western Mediterranean were modelled by the team, while data from the time of the accident was also re-analysed, including seismic reports indicating the likely implosion of the vessel as it dropped to the seabed.

But the discovery was ultimately made by a boat belonging to private US company Ocean Infinity, which found the Minerve 45 km from Toulon at a depth of 2,370 metres, a senior French naval officer told AFP.

The boat, the Seabed Constructor, arrived on the scene last Tuesday, the officer said on condition of anonymity.

The Seabed Constructor was also successful in locating Argentina's lost San Juan submarine in November 2018 which had disappeared in the Atlantic Ocean a year earlier.

The cause of the accident involving the Minerve has never been announced.

Experts have speculated that it could have been due to a problem with its rudder, a collision with another boat, the explosion of a missile or torpedo, or a fault with its oxygen supply systems.

The 1960s were deadly times for submarine crews, with a host of accidents reported around the world.

In April 1963, the nuclear-powered USS Thresher sank with 129 people aboard off Cape Cod, while 99 lives were lost in the USS Scorpion when it sank in the Atlantic five years later.

Also in 1968, the Soviet K-129 submarine armed with three nuclear missiles was lost in the North Pacific. It was found by the US in a covert operation in 1974.

The year 1968 was also marked by the disappearance of The Dakar, an Israeli vessel carrying out its maiden voyage with 69 men on board.

It disappeared and was only found off the Greek island of Crete in 1999.