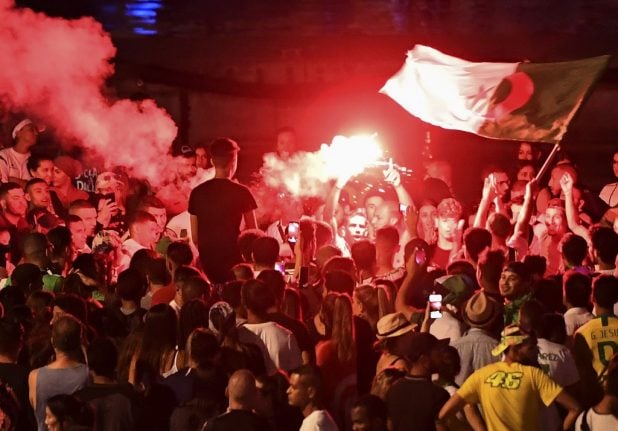 Algeria will take on Senegal in the cup final match tonight in Cairo, and preparations have been ramped up in France after trouble during Algeria's quarter final and semi final matches.

In Paris a total of 2,500 officers will be on duty, but police have resisted calls to close the Champs-Elysées which was the scene of trouble and several acts of looting after the quarter final match. Fans celebrate in Paris after the semi final. Photo: AFP

Paris police chief Didier Lallement: “I have no problem with people coming to show their joy on the most beautiful avenue in the world, as long as there is no breakage or destruction.”

He added: “I call on people celebrating, even if I understand their joy, to behave themselves.”

Troubled flared after the semi final last weekend when Algeria scored the winning goal in the dying seconds of the match and thousands of fans poured out on to the streets to celebrate.

In total 282 people were arrested, the majority of them in Marseille, Paris and Lyon.

The worst trouble was in Marseille, where after the match hundreds of fans tried to descend on the Old Port area of the city, where the traditional Bastille Day fireworks display was just finishing.

Police blocked their way and there were several clashes where fans were seen to throw stones and firecrackers.
Later in the night bins were set on fire and several bus shelters were demolished.
French police said that 50 people were arrested in Paris and 147 in the Lyon area – where dozens of cars were torched overnight.
Algeria and Senegal have already met at an earlier stage in the tournament when the score was 1-0 to Algeria. But despite that, bookies have listed Senegal as the favourite to lift the trophy.
The 2002 runners-up are desperate to end a long wait for a first continental title, while the Algerian teal – known as les Fennecs after the dessert-dwelling Fennec Fox – is looking to add to the trophy they lifted as hosts 29 years ago.
Due to France's colonial past in the country, there are tens of thousands of people of Algerian descent living in France today.