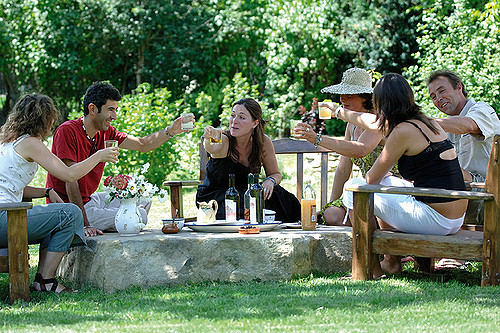 What should you serve at apéro time? Photo: ADT 04/Flickr

Of course there are many drink options, but we gave readers the choice of the luridly orange Aperol Spritz (actually Italian in origin but at this time of year you can barely move for them on French café terraces) and the French summer classic rosé wine.

In the most decisive poll we have run so far in our Daily Dilemmas series, readers voted overwhelmingly for a nice chilled glass of rosé.

On Facebook the vote came out at 68 percent in favour of rosé.

While on Twitter readers were leaning slightly more in the direction of Aperol – by one percent.

Living in France: Daily dilemmas. Well it's nearly the weekend and nearly apéro time, so which would you choose for the classic French pre-dinner drink?

But readers of The Local are a discerning bunch with wide-ranging taste, and they also came up with some other suggestions for a great apéro drink. Here are some of the best:

Hazel Mills said: “Prefer rosé to Aperol but would go for a Pastis first!”

Wine or Champage was a popular choice, with Gail Koepf suggesting: “A sweet wine and some walnuts.”

While Charles Norman Widdall prescribed the delicious sounding: “Edinburgh Rhubarb and Ginger Gin with a teaspoonful of frozen winter berries and tonic”.

Here at The Local we are big fans of the aromatised wine Lillet – often served with tonic and a slice of cucumber in the summer. It's apparently Hannibal Lecter's favourite drink, so it must be good.

The apéro is a serious business in France, and not to be confused with a 'happy hour' which is simply when bars offer cheap drinks.

A traditional apéro involves some food, but as this is a pre-dinner drink there won't be much to eat so you won't spoil your appetite.

Olives, a little bit of sausage or cheese, humous or tapenade are all frequently seen, as is foie gras if you're either at a very posh event or simply in the Périgord.

As for drinks, well there are some quite strict rules.

Kir is an apéro classic as is pastis but you could drink Campari, Vermouth or Aperol.

White wine, especially a sweet one, is quite common, as is rosé in the summer months or Champage but red wine will never be seen as the French believe that it should only be drunk with meals.

Beer was traditionally not invited to an apéro but these days is becoming more common, especially as craft beers and ales gain popularity in France.

Generally apéro time is somewhere between 6pm and 9pm, but it really depends when you want to eat.

For more on how to throw a classy apéro for your friends and neighbours, click here. The mercury is starting to dip again after last week’s record-breaking heatwave – which reached its peak on Friday and Saturday. But it’s only June, and it’s almost certain we’ll have another hot spell before the end of the summer. So here, we give you

Seven French expressions to help you complain about the heat

The 2024 Olympics hit the headlines again, recently – it seems most people enjoy the actual sporting jamboree at the time, but not the years of organisation that it and everything around it entails.

Lately, the ambitious plans for the opening ceremony along the banks of the Seine river have been up for debate amid growing security warnings.

Speaking of which… You may have noticed that tourists are coming back to France in force, now that most Covid-19 travel restrictions have been eased. But, not all of them are happy – and it’s all because of preparations for 2024. We explain more.

VIDEO: Why selfie-loving tourists are disappointed by Paris

Normally, we try to keep politics out of our weekly “6 essentials” rundown, even during election campaigns. But it is occasionally impossible. Here, for example, we unpick left-wing newspaper Liberation’s take on the political leanings of the humble jambon beurre – yeah, it came to that in this campaign.

French sandwich politics: What your snack choice says about you

Of course, sometimes a sandwich is … just a sandwich.

Now, to more important matters. After the elections, it’s sales time in France. You may think you know everything there is to know about sales. But this is France. They do things differently, here. So, here’s our little explainer.

Everything you need to know about France’s 2022 summer sales

Something else to look forward to now that the temperature has dropped. The summer solstice is also the one day of the year where your neighbours cannot get cross at you for blasting the music, and where everyone across France gets their groove on. Here’s almost everything you need to know about the country’s big music party…