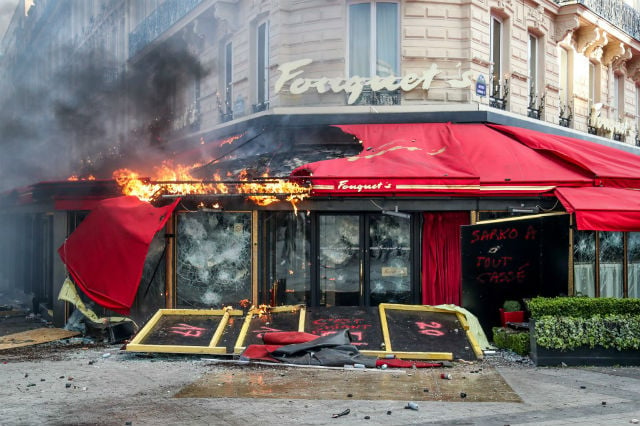 Yellow vests set fire to Le Fouquet's awnings smashed windows and trashed furniture. Photo: Zakaria Abdelkafi / AFP
It was one in a wave of businesses, banks and boutiques targeted in weekly protests which erupted late last year over planned fuel-tax hikes but ballooned into a national revolt over social inequalities.
But as protests dwindle — just a few hundred demonstrators turned up in Paris, Toulouse and Bordeaux last Saturday — the yellow vests are looking for new ways to voice their discontent with President Emmanuel Macron's government.
The reopening of the restaurant may be symbol of weekend life in Paris returning to normal, but analysts warn the anger which sparked the yellow vest movement remains in place.
“The protest has lost its protesters,” said Luc Rouban, research director at France's National Centre for Scientific Research (CNRS). “It started as a movement which everyone could identify with, but from January, February, we started seeing professional protesters and extremists who were organised and violent,” he said.”It's lost some of its originality.”
READ ALSO: Yellow vest protesters ransack Paris boutiques and restaurants
France's Interior Minister Christophe Castaner last month launched a review of police tactics after hordes of protesters were seriously injured in charges and by devices such as sting-ball grenades. And insurance companies have dished out millions of euros in compensation to business owners whose stores were robbed or damaged during marches.
But public support for the yellow vests remains strong, said Bruno Jeanbart, deputy chief at the polling firm OpinionWay.
In its latest survey in early July, 44 percent of French people said they supported the yellow vests.
“It's an incredibly high figure for a movement which has practically disappeared,” he told AFP. “When there are violent clashes in protests, public opinion generally turns against them. The yellow vests have largely managed to avoid that.”
'Frustration hasn't disappeared'
The protesters' calls for reforms such as a hike in the minimum wage and more direct democracy resonate with many who see Macron — an ex-banker — as elitist and out-of-touch.
Particularly explosive could be a pension reform which would see “incentives” to work beyond the retirement age of 62.
And while Macron navigated the EU parliament elections earlier this year — with his ruling party just about saving face in second place behind the far right National Rally — he faces a long road to the 2022 presidential polls.
“Just because the protests have lost momentum, that doesn't mean the frustration has disappeared. The volcano is no longer erupting, but the magma is still there,” Luc Rouban told AFP.
The remaining protesters are now working to tackle the lack of organisation and leadership which has hampered the grassroots movement.
Around 600 activists from around the country gathered in the eastern town of Montceau-les-Mines last month to discuss the way forward — their third such meeting.
They are pushing for referendums and backing non-politician candidates to run in local elections.
“The government managed to cope with the protests because they turned violent, but if they think it's all over, they're wrong,” said OpinionWay's Jeanbart.
“With the yellow vests, we knew something was going to happen but we didn't know what,” he said. “I think it will probably come back in a form we could never have imagined today.”