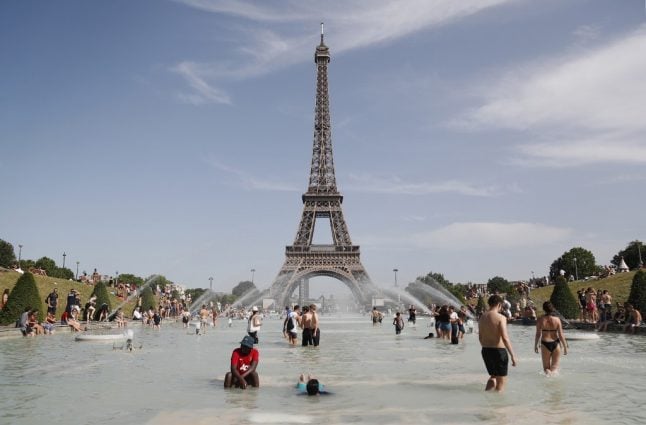 Scenes like this could soon be the norm in Paris and not just when there's a heatwave. Photo: AFP

The new research by ETH Zurich predicts changes in maximum temperatures over the coming 30 years, and pairs cities to places that currently experience those types of temperatures.

By their calculations, Paris and Lyon will both be at hot as Australian capital Canberra by 2050, while Marseille will have a climate similar to current-day Algiers. Temperatures such as those seen in last week's heatwave could become commonplace by 2050, according to new research. Photo: AFP

The data models the maximum temperature of the warmest month for a city, plus the average temperature for the year.

So for Paris the prediction is for a rise of 6.1C for the warmest day and a 1.4C rise to the average annual temperature.

Last month's heatwave saw temperatures of 39C recorded in Paris with a 'feels like' temperature of 41 due to the heat sink effect. So based on this model, Paris could be seeing temperatures of 45.1C – feeling like 47.1C – by 2050.

In the study published in the science journal Plos One, researchers led by Jean-François Bastin evaluated how the climate will develop in more than 520 large cities in 2050. They found cities in the Northern Hemisphere will have the climates that cities more than 998km to their south have today.

In Europe, summers and winters will get considerably warmer by 2050, with average increases of 3.5C and 4.7C, respectively, compared with 2000.

This is a conservative estimate, according to researchers. Temperatures, precipitation and seasonal changes were taken into account.

The research found that Madrid will have to adapt to a climate like that in Marrakech and Stockholm will be as warm as Budapest. Meanwhile, London was slated to be as warm as Barcelona in the summer.

Around the world, cities that are currently in temperate or cold zones in the northern hemisphere will resemble places far away and much closer to the equator.

In the tropics, temperature differences won't be as great as elsewhere. However, the climate crisis is more likely to be reflected in droughts and extreme precipitation. The researchers cannot predict exactly what this will mean for these cities.

Furthermore, they found that megacities such as Jakarta, Singapore or Kuala Lumpur are probably facing far-reaching changes.

All this has consequences for the infrastructure in cities, the researchers say, for which authorities are not yet prepared for. Water supplies, for example, will need to be re-thought.

France last month recorded its hottest ever temperature as an unusually early heatwave struck the country.

On June 28 the town of Gallargues-le-Montueux in the Gard département of south west France recorded a temperature of 45.9C while dozens of towns and cities across France broke their own local records.

In Paris temperatures climbed to 39C, but researchers showed that the 'heat sink' effect of big cities meant that it felt considerably hotter.

Over the course of the week-long heatwave wildfires broke out and several people died, including two people working outside during the heat and more than a dozen people who drowned while trying to cool off.