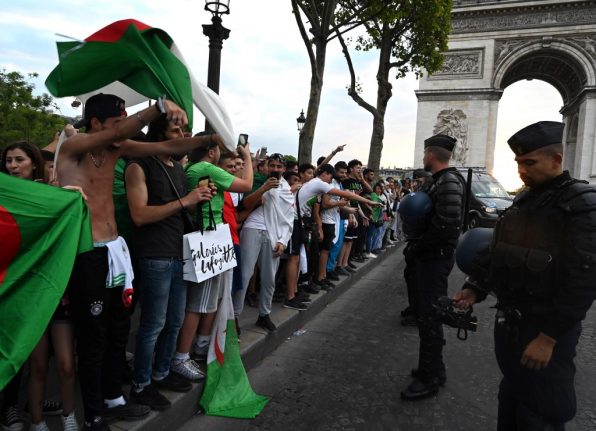 An Algeria supporter celebrating his team's win lost control of his car and ran over a family in southern France overnight, killing a woman and seriously injuring her baby, a security official said.

The 21-year-old man was driving at high speed in the Mosson neighbourhood of southern city Montpellier on Thursday night, the official said, adding the driver had been taken into police custody.

The woman was walking with her one-year-old baby and 17-year-old daughter when the accident happened.

The baby suffered traumatic injuries and was rushed to hospital, said the official.

The 17-year-old had a slight ankle injury, the spokesman said.

“At the moment we are trying to determine the circumstances of this tragedy,” the spokesman said, adding there were “lots of people in the streets” following Algeria's win over Ivory Coast in the African Cup of Nations which sent the team through to the semi-final.

In Paris two stores near the Champs-Elysees in Paris were looted, on the sidelines of celebrations marking the win.

Several thousand people gathered near the Arc de Triomphe, but as fans celebrated, a group smashed their way into two stores nearby, including a motorcycle shop, an AFP journalist said.

#Update: Just in – Video of the motor shop on a corner on the #ChampsElysees in #Paris, what has been looted empty by Algerian nationals and all the scooters on display have been stolen. #Algeria #CAN2019 pic.twitter.com/tWEBdv7cPk

Police used tear gas to disperse the crowds and at least one person was arrested, the AFP journalist added.

Tear gas was also used to control crowds of Algerian supporters who had gathered at the Old Port in Marseille.

In all some 74 fans were arrested across France as there were minor clashes in towns across the country that saw youths throw missiles at police.

“The damage and incidents yesterday evening on the margins of the celebrations for Africa Cup of Nations 2019 are unacceptable,” said Castaner.