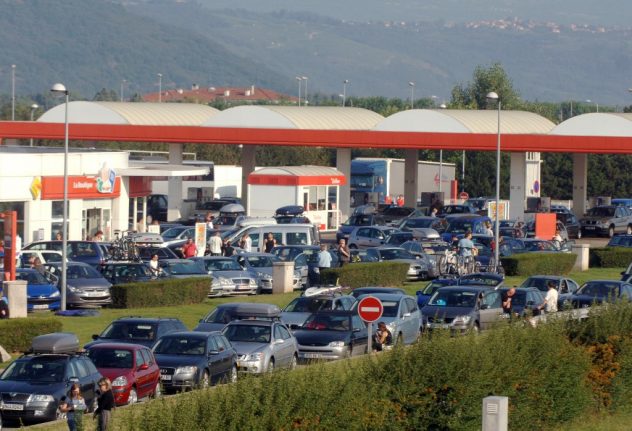 It's not just tourists who visit Paris who are the target of con-artists and tricksters.

Drivers from abroad have long been targeted by an array of scams and tricks by highway con-artists hoping to relieve them of their hard-earned cash.

For the most part the roads in France are safe, apart from the odd speeding driver, but there are a few dangers motorists need to be aware of, not least the list of reported scams that reveals how thieves will target your cash and belongings often relying on your charitable nature.

Motorists have contacted The Local in recent days with the aim of making others aware that con-artists are targeting foreign motorists in the country.

British national Elsie Gatto said her parents, aged in their 70s, were targetted by an Irish man in south east France as they were travelling back to the UK

She said they pulled into a service station Aire de Poulet de Bresse, on the A39 motorway between Lyon and Dijon.

“As soon as my parents parked their car, and before they even had the chance to open the doors, a man, who was accompanied by a boy around ten years old, knocked on my mum’s window,” she said.
READ ALSO: Driving in France – The common scams thieves use to target foreign motorists The man, tall, bearded with greying slicked-back hair, who was wearing a pink polo short and shorts, said he was Irish and on holiday in France with his family.
He told the elderly couple that he had been robbed of his wallet and passport and needed cash to get back home. He asked for €300 before convincing them to hand over €500, promising he would transfer the money into their bank accounts as soon as he was home.
The couple were suspicious but after the man agreed to let them take photos of him and his son, pictures of his ID and his car registration, they thought he was genuinely a father in need a help. The ID cards that were likely fake carried the name of “Gordon Kelly”.
“My father felt dubious about the man, but he found it hard to believe that a man would invent a story like this in front of a child,” the daughter told The Local.
“He felt sure that something was wrong, but he was confused by the presence of the child, who looked very sad. Also, my dad felt anxious and didn’t want the situation to escalate.
After handing over the money the man quickly hurried off to his car with the boy.
'This was a horrible human being' “They knew they had been manipulated, but they felt there was nothing they could have done or could do now. My dad was already feeling ill (they had cut their holiday short because he was unwell) so now they just wanted to get back to the UK as quickly as possible.”
The money has of course never been paid back and despite the daughter contacting the man by telephone and being in touch with police in the UK, Ireland and France it appears there is nothing they can do.
She was told by the local French police in the town of Louhans that they were aware of this type of scam, but they told her the fact her parents had not reported the incident in France when it happened made it difficult to follow up.
“This was a professional conman and a horrible human being. Quite apart from stealing my parents’ money, he has also caused them anxiety and stress. He will do it again. As you can see, it’s very easy to get away with. I bet he’s already gearing up for another spree over the summer months,” said Elsie Gatto.
It's not the first time drivers have been conned in this way in France.
There have previously been incidents in the south west of France of an English-speaking man and his family approaching people at service stations claiming to have been robbed and lost everything.

The man, who is normally with a woman and young children, pleads for cash to help them get back to the UK.

The man promises to return the cash to the bank account when they've made it back home and will normally exchange phone numbers and messages for a few days until everything goes quite.

The scam has been dubbed the “Irish Swindle” in south west France after an Irish couple were arrested after allegedly conning drivers this way.

A couple of French Good Samaritans also warned others after being preyed on by an English-speaking man with his family.
Romanian cash exchange
Another highway scam that has been reported in France is drivers flagging down foreign motorists claiming to have run out of petrol and needing cash because their credit card won't work.
The confidence trickster then offers an amount of Romanian cash in exchange for euros.
Derek Berman contacted The Local recently to say he had been preyed on by a con-artist on the D704 between St Yrieix la Perche and Limoges in central France.
“He had a smart dark car, possibly a Mercedes and it’s rather odd for it to have run out of petrol in this area of France,” Derek Berman told The Local.
“He was very smart and spoke broken English. His wallet looked new and appeared to have only a very new looking Visa card and a foreign note he said it was Romanian but I did not look at it properly or the value.
“It seemed odd that garages would not accept a Visa and even odder that he’d made it this far. He seemed rather more keen on me exchanging his note than getting a lift to the next petroleum station,” he said.
“The story seemed strange and he made me feel nervous so I drove off.”
British motorising association The AA has told The Local that drivers need be wary of anything out of the ordinary and try to avoid leaving valuables in the car.
Although much car crime is opportunistic and could happen anywhere, tourists should be particularly vigilant when driving through areas noted for this kind of tricks.