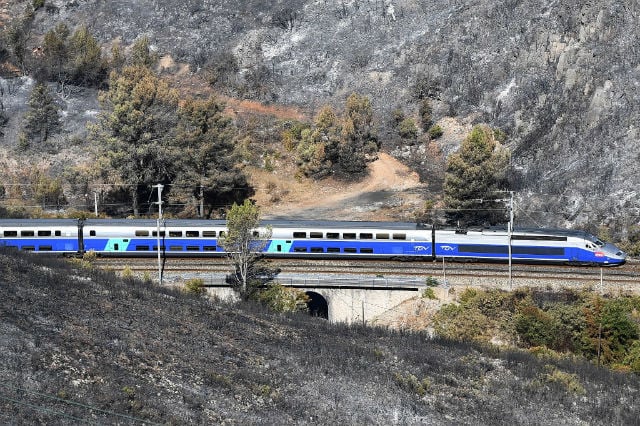 What better place to spend your summer holiday than France? Sure, it might be a great place to travel all-year-round, but with its stunning coastline, lavender and sunflower fields, as well as the possibility of a refreshing glass of pastis in the evening, summer in France is not to be missed out on.

But should you reply on planes, trains or automobiles for your transport?

We asked our readers for their opinion on the best way to get around France – and one came out miles ahead of the rest.

READ ALSO: Everything you need to know about taking the train in France 'Nothing beats the French rail system'

That's right – perhaps unsurprisingly France's much-lauded train network was the top pick for travelling around France among our readers.

France is known for its great train network and deservedly so – even if there are times when it isn't running as smoothly as it might be.

The high-speed TGV service will get you from Paris to Marseille in just over three hours or Bordeaux in two hours (thanks to the new fast line and ultra-modern trains), and unlike taking a plane you don't have all the hassle of security checks and arriving at the station over an hour in advance.

What do you think is the best way to travel around France? For example, if you found out you had to travel from Paris to Nice next week, which of the following modes of transport would you choose, and why..? Explanations as a reply, please!

“You can't beat the ease of departing and arriving right in the middle of town, plus the dreamy views of the French countryside during the trip! The train stations themselves are often beautiful as well,” said Charli James.

Jule Darmanin, who is from Nice and lives in Paris, said: “I prefer [the] train even though it is longer, because it doesn't come with the hassle of going to and from an airport. I would choose train for London, Belgium and even Italy and Spain.

hey! from nice, live in paris. I prefer train even though it is longer, because it doesn't come with the hassle of going to and from an airport. I would choose train for London, Belgium and even Italy and Spain.

“Nothing beats the wonderful French rail system,” said Gregg Kasner who lives in the US.

But all this convenience comes at a price, with the cost of a TGV often fairly hefty, especially if you leave it too late to benefit from the early bird discounts.

And other readers said that while the train was their preferred route, the expense could sometimes be significant enough to tempt them over to other modes of transport.

“I love taking the train! Comfortable and clean, but can be expensive (even with a carte jeune) for peak times. I would use BlaBlaCar if it was too expensive,” said Charlotte Mason.

I love taking the train! Comfortable and clean, but can be expensive (even with a carte jeune) for peak times. I would use BlaBlaCar if it was too expensive.

At the time of writing, a single journey ticket from Paris to Nice on July 19th would set you back €115 but you can make some savings with the various discount cards available from France's national rail operator SNCF.

Discounts to know about

Back in May,  SNCF introduced new discounts to make travelling by train a bit easier on the bank balance.

SNCF is launching a new railcard offering a new discount card to regular travellers, replacing the various different loyalty schemes currently on offer which cost between €50 and €70.

The new Avantage Jeune card is available for young people (aged 12 to 27) and Avantage Senior to senior citizens (aged 60 plus). There is also an Avantage Week-end, available for people aged 27 to 60 for weekend travel and Avantage Famille.
Each card costs €49 a year and offers 30 percent off to adults, while the family card also offers 60 percent off for children aged between four and 11 (up to a maximum of three children).

You can also make savings using the low cost version of the TGV, Ouigo.

The number of destinations is far more limited than the normal TGV but you might luck out and realise that your destination is already serviced by Ouigo or, if you're on a strict budget, you could simply travel to one of the Ouigo destinations. These include: Lille, Avignon, Marseille, Montepellier and Toulouse, and you can see the full list here.

However, as with normal TGV trains, you're far more likely to benefit from the cheaper prices if you book in advance. At the time of writing a single journey to Nice in two weeks time is still a fairly punchy €99.

READ ALSO: How to see the very best of Europe this summer (Sponsored)

Photo: AFP
Other forms of transport

As previously mentioned, at the time of writing, a single journey ticket from Paris to Nice on July 19th would set you back €115 and take six hours. Meanwhile a plane ticket would cost €126 for a 90-minute journey.

If you would rather travel by plane, you might want to do so sooner rather than later as the French government is planning a crackdown on flights within Europe.

Another option are carpooling services, such as BlaBlaCar, which would set you back around €54 for the same journey on the same day – and it can also be a good way to practice your French.

Driving your own car was the most expensive way to travel from Paris to Nice, costing an estimated €160-€190 for a journey that would take around nine hours.

As well as paying for petrol, don't forget that most motorways in France are toll roads so you will have to pay tolls for longer journeys.

Despite this, reader Colin Hargreaves believes travelling around France by car is the best way to get around.

“Hire cars can be quite cheap especially when leased from your own country, for use in France,” he said. “Having a car is good for visiting little villages and churches/abbeys.”

There are also bus companies that operate services between the country's major cities, so if you'd rather take longer to get to your destination and pay less to get there, it might just be the perfect mode of transport.

However, once again, it's important to book well ahead of time.

The same journey to Nice would set you back €90 if you booked on Flixbus, and that might seem a little expensive for nine hours on a bus in summer.

However, don't forget that local buses can also be a good way to explore smaller areas when you're travelling in France.

“I actually like taking the local buses from towns and villages to explore neighboring places,” one reader told The Local. “It is convenient, inexpensive, and you get to mix with the locals.”

READ ALSO: How to see the very best of Europe this summer (Sponsored)