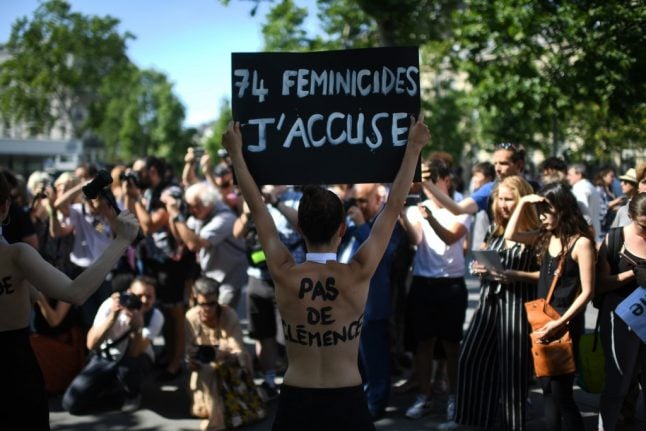 Women take to the streets of Paris to protest. Photos: AFP

Since January, 75 women have died as a result of “femicide” – murder at the hands of a husband or partner – prompting more than 1,200 protesters to take to the streets of Paris to demand action.

“We are launching… a national consultation with the public and a campaign to wake up society,” France's Minister for Gender Equality Marlene Schiappa told the Journal du Dimanche (JDD).

The consultation, which will begin on September 3, will be overseen by Prime Minister Edouard Philippe and bring together ministers, rights groups, public services and victims' families with the aim of “creating more effective ways of working” on the ground, she said. But the announcement drew a scathing response from feminist collective #NousToutes (“All of Us”), which denounced the delay in taking action in a  statement titled: “Mr President, violence does not take a holiday”.

“Women are in danger right now,” the group said after a woman in her 30s was strangled to death at her home on Saturday.

In a message on Facebook late Saturday, President Emmanuel Macron admitted that France “has not known how to protect” women from deadly violence by their current or former partners.

La Fondation des Femmes (The Women's Foundation) said the government consultation was “a first positive step” but warned that the victims needed “real and concrete measures, with funding” and not just “another awareness campaign”.

Schiappa said the consultation process would end on November 25, the International Day for the Elimination of Violence against Women. In 2017, 130 women in France were killed by a partner or former partner, compared with 123 a year earlier, interior ministry figures show.