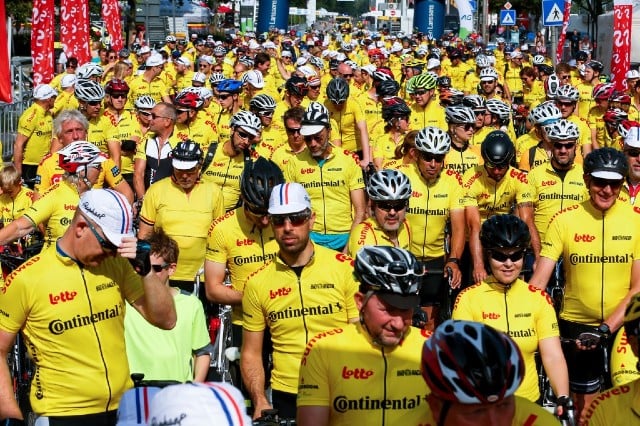 A pre-race 'yellow jersey' event in Belgium, which is hosting the start. Photo: AFP

1. It starts in Belgium. This year the Grand Départ will be in Brussels before the cyclists cross over the border and complete the majority of the ride in France. Despite its name, the Tour frequently crosses over into other countries for at least some of the race and in the past has had sections in Spain, Italy and the UK, which hosted the Grand Départ in 2014. Setting off from Yorkshire (the best bit of the UK) the race attracted huge crowds and proved to be a big boost for cycling in the region.

2. It started out as a publicity stunt. The first Tour in 1903 was an attempt to boost flagging sales of French newspaper L'Auto by offering a cash prize to the winning cyclist. Of the 60 that started, only 21 completed the course.

3. The current favourite to win is a 22-year-old Colombian rider called Egan Bernal. If he does triumph it will be the first time that a Colombian – or indeed anyone from South America – has won the event, the leaderboard of which is heavily dominated by French riders (36 winners out of 105 events). Egan Bernal on the podium at the Paris-Nice race. Photo: AFP

5. It starts on Saturday, July 6th and finishes three weeks later in Paris on July 28th. As is traditional, the last leg of the race will be a largely ceremonial ride up the Champs Elysées where the winner will be crowned. Spectators will be seen along the route, but the towns hosting a stage departure usually offer a good view for spectators, and frequently put on an event to celebrate the tour coming through the town.

If that all sounds like too much effort, the race will be televised.

The start of each stage – le départ

The group of cyclists – le peloton (literally translated as 'the pack)