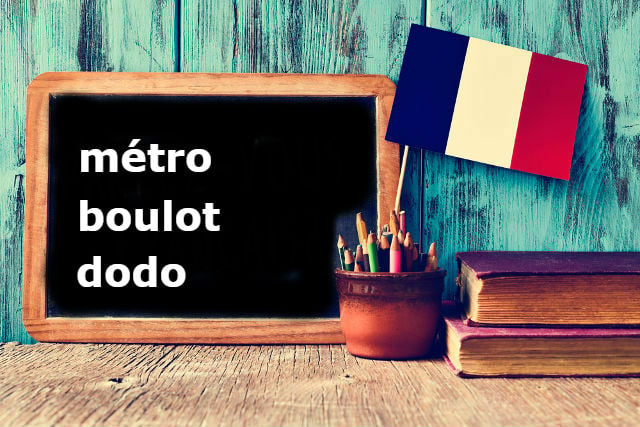 Why do I need to know métro, boulot, dodo?

If you're a city dweller living in one of France's major cities, then there will come a time when it feels like there's nothing more to life than métro, boulot, dodo.

This phrase – literally 'commute, work and sleep' – is a great way to describe the 'daily grind' in French.
You'll hear people use it when they feel like they're living to work, and you might well find yourself cracking it out every now and then too.
Métro, of course refers to the commute, boulot is an informal word for work, and dodo is baby talk for sleeping.
The phrase is so common that there is a trend for putting twists of the original onto bags, T-shirts and other knickknacks such as métro, boulot, apéritvo (commute, work and apéritif).
Examples
Le quotidien des habitants des grandes villes c'est métro, boulot, dodo. – 'The daily lives of people who live in big cities is commuting, working and sleeping.'
Depuis ma promotion, c'est métro, boulot, dodo! – 'Ever since my promotion, it's been nothing but work, work, work!'
Origins
The expression was invented by French writer Pierre Béarn in a poem he wrote in 1951 in which he describes the daily rhythm of Parisians and other city dwellers.
It also became one of the slogans of the May 1968 demonstrations that brought millions of idealistic students and striking workers to the streets.
For more French Expressions and French Words of the Day you can CLICK HERE to see our full list Why do I need to know c’est du vent?

Because you might wonder why the politician is talking about wind in response to questions about the latest scandal.

C’est du vent – roughly pronounced say doo vahnt – translates literally to “it is the wind”, but in reality it is more akin to the English expression “it’s just hot air” or “it’s a load of nonsense”.

You can use this expression when you want to say that someone has made an empty threat, or if their words are unlikely to be followed through with real action.

This is a French expression you might hear politicians use when seeking to downplay something – for instance, a strike threat from unions.

You may also hear someone use this expression to minimise an accusation or rumour that is circulating about them. If you want to target a specific person when using the phrase, you could say “Il/Elle fait du vent” (He/She is full of hot air).