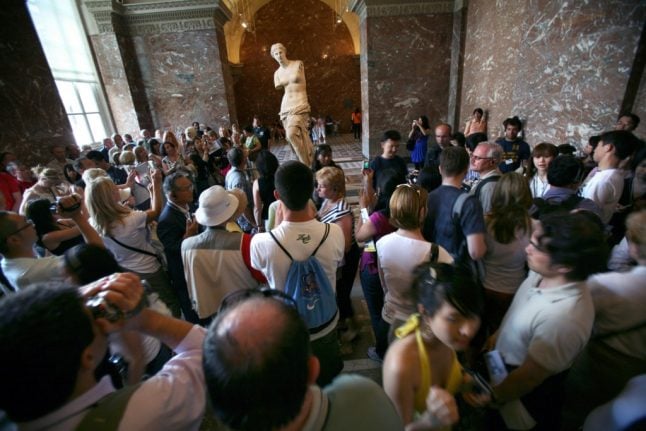 Tourists in the Louvre. All photo: AFP

Anyone who has lived in Paris will know the annoyance of a dithering tourist blocking your way on the Metro, or shoving a selfie stick in your face when you're just trying to buy your baguette. But the constant flow of visitors provides a vitally important income stream for the city – so how to balance the competing demands?

The Paris Mayor's office recently hosted a symposium for city businesses with the title 'Are there too many tourists in Paris?'.

Organisers stressed that: “Although these tourist flows contribute to the economic and cultural development of the city, rapid and poorly regulated growth can disrupt the daily lives of residents with noise pollution, pressure on rents, transformation of the commercial fabric, transport congestion.” But people involved in the industry, particularly tour guides, complained that the city of Paris should do more to help tourists – in particular doing more to crack down on pickpockets and bag-snatchers and providing more public toilets.

It's certainly true that the most popular tourists sites, such as the Eiffel Tower and the Louvre, can become choked with tourists.

In fact last month staff at the Louvre went on strike, complaining that the museum was 'suffocating' under the sheer number of people who visit every day.

The Local asked Paris residents and tourists whether they thought the current situation was sustainable.

Among The Local's readers, opinion was divided over whether there are too many people, but one thing everyone agreed on was that tourists should be encouraged away from the 'hotspots' like the Eiffel Tower.

Anthony Scott, who lives in the 17th arrondissement, said: “I don't how many is too many, but the concentration of groups inundating obvious sites clearly impacts everyone. Residents, for example, cannot easily enjoy major art museums or historic sites in and around Paris as they are constantly besieged by hoards of selfie obsessed tourists.”

Another reader suggested that authorities could do more to steer tourists away from the most obvious sites.

While others pointed out that the number of visitors means that it can feel less like a real, functioning city.

Several people pointed out that tourism brings vital revenue to the city, but Philip F. Wizenick from Chicago, who visits the city every year, suggested that Airbnb apartment rentals were making the situation worse and needed more regulation.

Anthony Scott also suggested that there should be 'fast track' queues at cultural sites for Paris residents. But among tourists themselves, people were generally happy with things as they are, despite the long queues that can build up at the major sites.

Lyu, who had travelled from China, said: “It's good that there are lots of people, it means that the place is popular. I only want to go to places that are popular.”

While Lawrence, from the Netherlands said: “It's my first time in Paris and while there are a lot of tourists I don't find it too many.”

Grace, from Yorkshire in the UK, said: “I think there are too many people at some sites, but I think good marketing would help spread the tourists better around the attractions in Paris and France.

“So for instance there are fewer in Montmartre, then let’s say, the Eiffel Tower.

“You know, some people would go and see the Eiffel Tower, but they could go to Belleville with just as nice a view.

“We have the same problem in London, it’s the only place in the UK where many tourists go but they get a false impression of the UK. Well, most of France is not Paris. I mean, it’s wonderful, but they are very different.”

But American tourists Shelby and Amanda, from Washington and Maryland, said that Paris has nothing on New York when it comes to tourist numbers.

They said: “There really isn’t a problem. Diversity is good. And tourism is really good for the economy. Locals actually get a lot of money because of tourists.”

He said: “We have not reached the levels of Venice or Barcelona, but there is a concern among Parisians that the reception of tourists should not cause too much inconvenience.

“In addition to the hypertourism sites, tourist gatherings are developing in some districts of eastern Paris, in the 11th century, around Bastille, République and Oberkampf, which are near tourist sites.”

He suggested greater regulation of Airbnb, which is already being worked on by the city, and wants to bring in stricter regulations on tourists buses in the city centre.