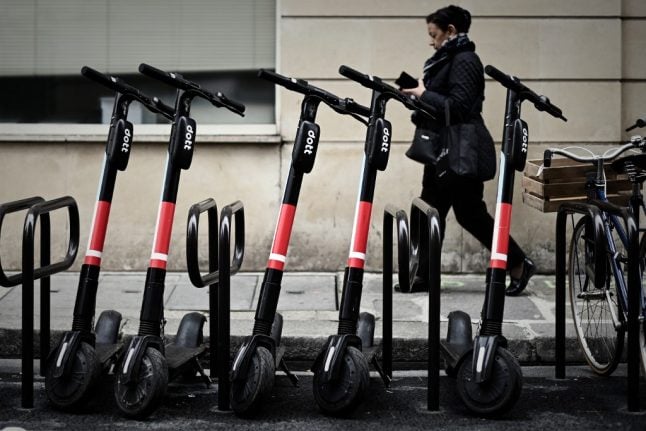 From cutting the speed limit, to banning them from pavements and fining users who flout the rules, electric scooters have been the bugbear of the Paris authorities since they were introduced to the French capital in June 2018.

After several attempts to improve the situation, Paris Mayor Anne Hidalgo recently announced that she wants to cut the number of companies operating scooter-sharing schemes from 12 to three in a bid to end the “anarchy of scooters”. But it looks as if the scooter companies are more than happy to exit the tricky market of their own accord.

Nearly half of the operators, namely Bolt, Wind, Hive, Ufo, Voi and Tier, have already either stopped or suspended their service in Paris, according to a report in Les Echos.

There are currently around 20,000 scooters for hire in Paris, and it had been predicted that number would rise to 40,000 as more companies got involved.

Although they have proved popular with tourists and some commuters, many locals have complained about them being ridden at dangerous speeds on the pavement and then left in inappropriate places.

Bolt, an Estonian company which launched its scooter-sharing scheme back in September 2018, has “temporarily” put its service on hold, saying the decision had been “motivated by the high number of players on the market”.

“Today there are too many scooters in service in proportion to the rate of use – and consequent maintenance costs to overcome malfunctions and malicious acts (such as damage and theft),” said the company.

Similarly, Hive, which launched their Paris service in March this year and once had 800 scooters in the capital – has stopped its service.

A person familiar with the company said that it was down to a misunderstanding of the Parisian market and strategic errors, such as having a third party handle the redistribution of the scooters.

Nevertheless the company has said it will be back “soon” with “a new generation of scooters that will provide a better experience for customers, increase safety and have a longer life.”
According to Les Echos, industry experts have been predicting consolidation for several months due to the saturation of the scooter market in Paris.
Hashfeeda, who lives in Paris' 19th arrondissement, said she does not use scooters.
She said: “They are good for the environment, however, there isn’t enough space.
“There aren’t specific streets or parking lots for these in the city so they're dangerous.
“When we try to implement things for a good reason – and I know that these electric scooters have benefits overall – we forget the bad effects. There have been so many accidents, especially in narrower streets.”

Stephanie added: “They are not helpful to the city because they piss people off. They are not regulated and those who use them don’t respect others.”

But for anyone hoping to switch to pogo sticks for their method of transport, there may be more bad news.
Swedish company Cangaroo announced that it would be starting a pogo stick ride-sharing service based in Malmo, before expanding to Paris in September.
However when interrogated by our sister site The Local Sweden, the man behind the idea admitted that it was entirely possible that the company may “only manage to put out ten pogo sticks in two cities and then we're out of money.”