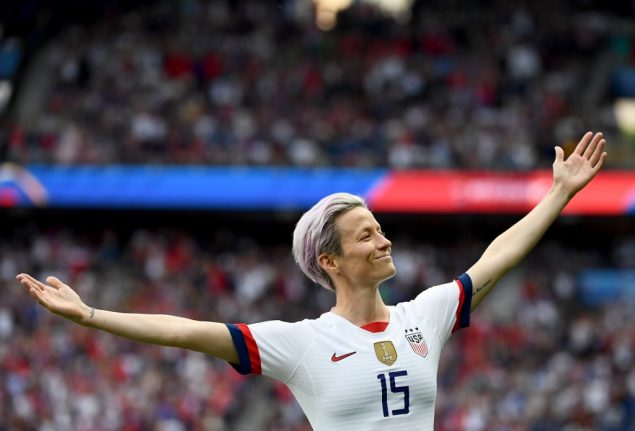 Are Team USA on their way to the World Cup final? Photo: AFP
Monday July 1st
The first round of testing of France’s general certificate for secondary education (brevet des colleges) was postponed from last week due to the heatwave. Instead pupils aged 14 and 15 will be taking their exams on Monday and Tuesday.
The 35th edition of the Fête du cinéma starts today. Just €4 per screening will help you ditch the exorbitant rates of movie theatres. You only have until July 3rd to see not only movie theatres but places around Paris switch to cinema mode, such as libraries, airports, and museums.
The regulation of rental property and new restrictions on diesel cars come in to effect in Paris. Protests over the new education bill. Photo: AFP
Tuesday July 2nd
The inaugural session of the new European Parliament will be held in Strasbourg.
The final vote of the French deputies on the controversial Loi Blanquer education reforms will take place. The National Assembly read the bill first in February, and the Senate modified and adopted it on May 21st. The law has been the subject of industrial action by teachers.
England will take on the USA in the semi finals of the Women's World Cup in Lyon. Kick off is at 9pm.
Wednesday July 3rd
Prime Minister Édouard Philippe will be in Corsica for a session hosted by the l’Assemblée de Corse (Corsican parliament) to discuss the ongoing tension between Corsica and the state.
The election of the new president of the European Parliament will be held in Strasbourg.
It’s the beginning of the Festival d’Art Lyrique d’Aix en Provence, with Mozart, Puccini, and Weil among the composers in the line-up. Excitement is mounting in Belgium over the Tour de France. Photo: AFP
Thursday July 4th
The final vote of the National Assembly on the bill on the 'gafa' tax on big tech companies (named after Google, Amazon, Facebook, and Apple). Lawmakers have been debating endorsing a 3 percent tax be imposed on the digital sales of global tech firms with revenues of at least €750 million and sales in France of at least €25 million.
The beginning of the Festival de Theatre d’Avignon, which is one of the most popular contemporary performing arts festivals worldwide.
The grand opening of the Japan Exposition in Paris.
Friday July 5th
Édouard Philippe will be in Poznan, Poland for a summit on the future accession of Western Balkan countries.
Controversial French comedian Dieudonné will be on trial on Friday accused of fiscal fraud, money laundering, and misuse of company assets.
The 19th Rencontres économiques d’Aix-en-Provence will take place this weekend, from Friday July 5th to Sunday, July 7th. It aims to revitalise economic debates at the local and European levels. Each year, the conference has a unique theme to better understand economic problems and suitable policies. This year’s theme is restoring growth (Renouer avec la croissance).
Saturday July 6th
The starting point of the Tour de France will be in Brussels, Belgium.
Sunday July 7th
The final of the 2019 Women’s World Cup will be held in Groupama Stadium, Lyon. There will be more than 50,000 fans cheering for their respective football teams. The winner of the England v USA match will take on either Sweden or the Netherlands. Kick off is at 9pm.