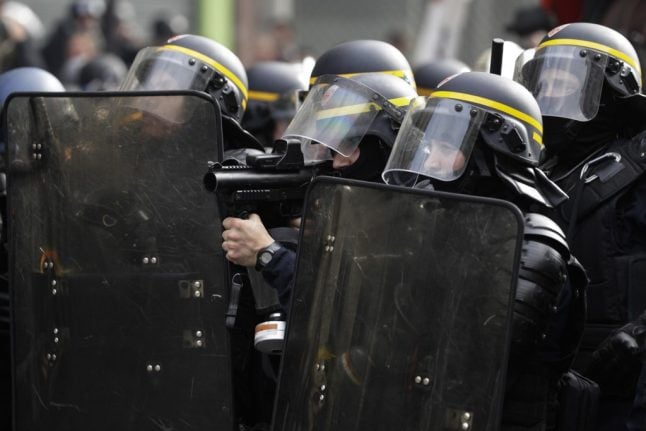 Interior Minister Christophe Castaner on Sunday ordered an investigation into the incident during a protest by the Extinction Rebellion group on Friday over the government's environment policies, which took place in the middle of a heatwave.

A video shared on Twitter and since widely broadcast on news channels shows a police officer yelling “clear off” at a group of protesters sitting on the ground with their arms linked and heads bowed after they had refused orders to vacate the bridge.

On June 21st, @EmmanuelMacron demanded we make his “life impossible”, referring to meeting the demands of environmental activists. We took it literally by occupying the Pont de Sully on June 28th, and in return suffered a violent repression.

Here's our message to him (EN subs) pic.twitter.com/sjkjullM7t

When they refuse to budge, at least two officers spray them with hand-held teargas cannisters at point-blank range, while the demonstrators try to shield their faces, boo the police and shout “non-violent!”.

The officers are then seen dragging the protesters off the street one by one.

One protester, who gave her name as Flora, told AFP that the police used tear gas after some protesters that had been dragged away returned to the sit-in.

“They opted for a strategy of gassing people 20 centimetres from their faces,” she said.

The Paris police department said the officers had intervened to stop the protesters blocking traffic and that the demonstrators had been ordered “several times” to disperse. It said two people were arrested.

Images of the standoff caused an outcry both at home and abroad with Sweden's teenage climate activist Greta Thunberg tweeting a link to the video with the words: “Watch this video and ask yourself; who is defending who?”

Meanwhile, on the hottest day in the history of France, here’s shocking video of police spraying tear gas in the faces of climate activists in Paris.

This happened today. Do not look away. https://t.co/F43YoxANT5

In a further sign of how climate activists are increasingly turning to direct action, Greenpeace activists have been blocking the unloading of a Brazilian soy shipment in the southern French port of Sete.

On Monday, five of the activists — who blame soybean production for deforestation — were forcibly removed from the cranes to which they had chained themselves.

Launched in Britain, the “Extinction Rebellion” group uses acts of civil disobedience to draw attention to climate warming. Last month the group took part in the blockade of an open-pit coal mine in Germany.

Several French politicians condemned the treatment of the protesters in Paris.

Eric Coquerel, a lawmaker for the hard-left France Unbowed party, described the images as “shocking”.

“It's inadmissible to use teargas like that,” he told BFM news channel, accusing the authorities of using disproportionate force.

Socialist leader Olivier Faure in a tweet said that the activists should have been sprayed with “water bombs” and not teargas in a week when temperatures hit record highs in France.

“That would not happen in a dictatorship and it's happening in France,” he added.

Environment Minister Francois de Rugy was accused of adding to the controversy by characterising the activists in a TV interview Sunday as “very radical” and justifying the use of the teargas “which aims to get people to leave” the area.

But there was disquiet among some members of Macron's centrist Republic on the Move party with MP Barbara Pompili telling France 2 television she was “like everyone, quite shocked at tear gas being sprayed very close to people's eyes”.

Over the past year President Emmanuel Macron has come under growing criticism over what activists see as his failure to keep a 2017 promise to “make our planet great again”.

French police have also been heavily criticised for their tactics during six months of weekly protests by anti-government “yellow vest” demonstrators.

Police have been unable to stop crowds ransacking buildings and businesses, while they have also been blamed for a spate of serious injuries caused by law-enforcement weapons such as rubber bullets and stun grenades.