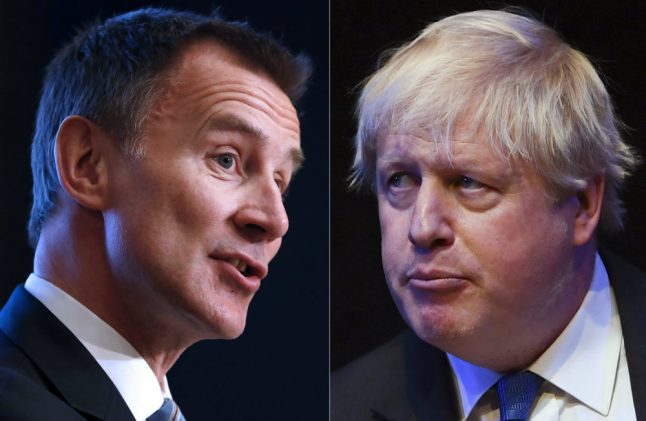 Former London mayor Boris Johnson, a Brexit figurehead, faces Foreign Minister Jeremy Hunt in a run-off vote to decide who takes on the tricky task of piloting the country's departure from the EU.

Johnson is the runaway favourite.

Both men have said they want to renegotiate the deal that outgoing Prime Minister Theresa May spent two years brokering with Brussels but which was rejected three times by the British parliament.

The EU insists there is no alternative to May's deal.

“If the United Kingdom wants to leave the union and to leave in an orderly fashion, the deal on the table is the deal we negotiated over two years,”

De Montchalin said Johnson, Hunt “and all the others”, including the opposition Labour and Liberal Democrats, were “welcome” to negotiate with the EU on the declaration on future UK-EU relations that accompanied the Brexit deal.

But “to reopen the withdrawal agreement, the position of the Council (of EU leaders) is very clear, it's: 'no',” she said, echoing remarks last week by European Council president Donald Tusk and European Commission chief Jean-Claude Juncker.

EU leaders have been at pains to conceal their dismay at the prospect of Johnson, a Brexit hardliner accused of grossly misleading voters about the repercussions of quitting the EU, becoming Britain's next leader.

On Friday, Johnson was again at the centre of controversy after it emerged that footage of him calling the French “turds” while foreign minister was cut from a BBC documentary at the request of his office.

De Montchalin refused to comment on the reported remarks, which Johnson said Friday he had “no recollection” of making.

“I prefer not to comment on words I don't understand because they were not part of the vocabulary I learned in school,” De Montchalin said.

She added France and the EU would work “with whichever prime minister is chosen by British institutions.”