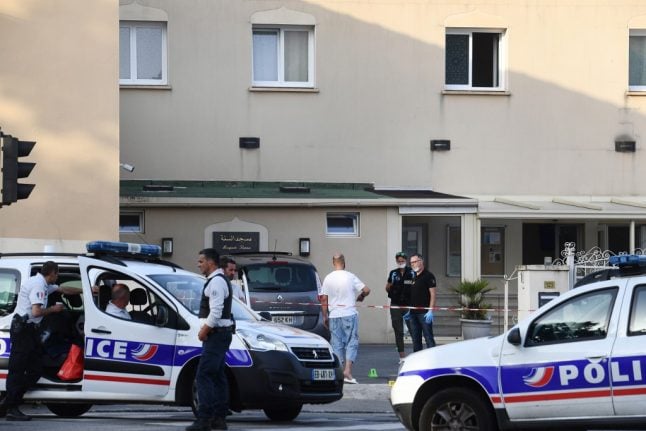 Police outside the mosque in Brest. Photo: AFP

It was not immediately clear what motivated the incident in the port city of Brest in Brittany, but Interior Minister Christophe Castaner said he had issued orders to increase security measures around places of worship across France.

Imam Rachid El Jay was hit by four bullets while a worshipper who was with him sustained injuries from two bullets, but neither was thought to have life-threatening wounds, the French Council of the Muslim Faith (CFCM) and judicial sources said. “(El Jay) sustained two bullet wounds to the abdomen and two to the legs.

The worshipper was hit in the legs by two bullets,” the CFCM said.

The incident occurred around 4pm, when several shots rang out in front of the mosque, it said.

A police source said the suspected shooter was found dead in an area near the airport, some 10 kilometres from the mosque, with a fatal gunshot wound to the head after an apparent suicide.

Police have opened an inquiry, with the Paris prosecutor's office saying the situation was also being looked into by the anti-terror squad.

Writing on Twitter, Castaner said he ordered for security to be heightened nationally around places of worship.

“I have asked local officials to step up security around places of worship across the country,” he wrote.