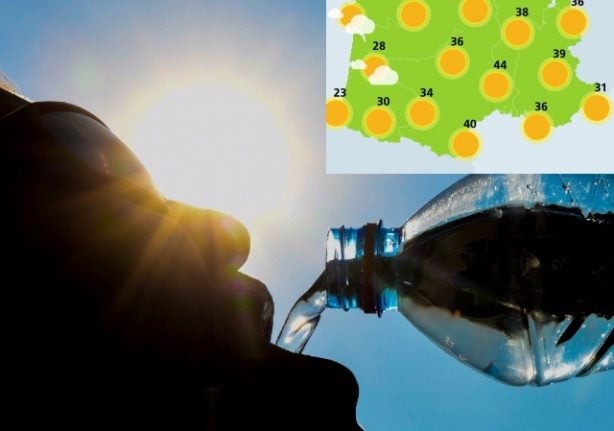 The record for the hottest temperature ever in France was broken three times on Friday within a matter of hours.

First the town of Carpentras (see map) in the Vaucluse department of the south east France recorded a temperature of 44.3C – an all-time record for France. Or at least it was for around an hour or so.

The town was deserted, with cafe owners contemplating empty terraces which would normally be packed.

“We have never seen this!” one exclaimed.

It had beaten the previous hottest temperature which was 44.1C, recorded in Saint-Christol-lès-Alès et Conqueyrac, also in the south east near Avignon.

But then it was the turn of Villevieille (see map below) in the Gard department to hit the headlines when it became the first town ever in France to record a temperature above 45C. The mercury hit 45.1C at 14.59 according to Météo France and may yet rise even further.

But at 4.20pm the temperature of 45.9C (115 degrees Fahrenheit) was recorded in Gallargues-le-Montueux, near Montpellier in the same department of Gard.

The new record makes France just the seventh European country to have recorded a plus 45-degree  temperature, along with Bulgaria, Portugal, Italy, Spain, Greece and North Macedonia, Meteo France said.

The Gard and Vaucluse departments are two of four areas placed on red alert with the public warned to take the upmost care.

The previous record had stood since August 12 2003, the middle of the last major heatwave that gripped France, in which 15,000 people died.

French weather forecasters had predicted that a record could be broken on Friday, and the average maximum temperature recorded on Wednesday in France of 34.9C was already a record for the month of June, said state weather forecaster Meteo France.

Meteo-France forecaster Etienne Kapikian said it was “very probable” that the record would be beaten again on Friday as it was still relatively early in the day.

“(The temperature) will continue to climb and, in some places, we could pass 44C,” he said.

At least fourteen French towns have already recorded their hottest ever temperature, while dozens of others have set records for June.

French Prime Minister Edouard Philippe announced on Friday morning that a total of 4,000 schools in France would be closed on Friday due to the extreme heat.
In four departments in the south of France (Herault, Gard, Vaucluse and Bouches-du-Rhone) the level of alert was raised from orange to red on Thursday, with the alerts still in place on Friday morning.
The move marks the first time since the warning system was brought in in 2004 that parts of the country have been on red alert for the a heatwave, called a canicule in French.

Meanwhile a further 76 departments were on orange alert – the second highest warning – for the heat.
In Paris, Lyon, Marseille and Strasbourg, authorities have banned the most-polluting cars from the roads.
In the French capital, only vehicles registered 0, 1 or 2, as well as people with electric vehicles, will be permitted to drive. While in Marseille and Strasbourg, only vehicles registered 0-3 will be allowed on the roads.
Several cities in France use the Crit'Air system. The sticker scheme assigns a number from 1 to 5 to all vehicles, based on how polluting they are. Level 5 vehicles have already been banned from central Paris on weekdays and level 4 – which mostly covers older models of diesel cars – will be banned from Paris from July 1st.
Residents of the French city of Grenoble were unable to use two municipal swimming pools despite the record temperatures, due to a row sparked by use of the full-body 'burkini' swimsuit.
Lifeguards had asked for the shutdown after Muslim women clad in burkinis had gone to swim in defiance of a municipal ban, said the local mayor. French President Emmanuel Macron warned that such extreme weather is likely to become more frequent as a result of global warming.
“We will need to change our set-up, our way of working, build differently,” he said, stressing a necessary “adaption of society and its habits.”
French Health Minister Agnes Buzyn on Thursday said people had to be prepared for the peak of the heatwave and expressed irritation that some appeared not to be listening to advice.
She complained about parents leaving their children in the car and joggers exercising in the midday heat.
On Thursday the heat led to a particularly uncomfortable journey for passengers on one train heading from Paris to Clermont-Ferrand.
The train passengers spent the night on the train, without air conditioning, water and the toilets were out of order, after the train was delayed.
“We went out to get some fresh air because it was almost 30C in the carriage and we stayed outside for about six hours. It was really a nightmare night,” one passenger called Sophie told the French press.
So, what next?
Anyone struggling in the heat may be pleased to know that the current heatwave is expected to come to an end on Sunday for most of the country, except the south east of France where it is forecast to last until Wednesday.
Storms are expected to hit the French capital on Wednesday and Thursday.