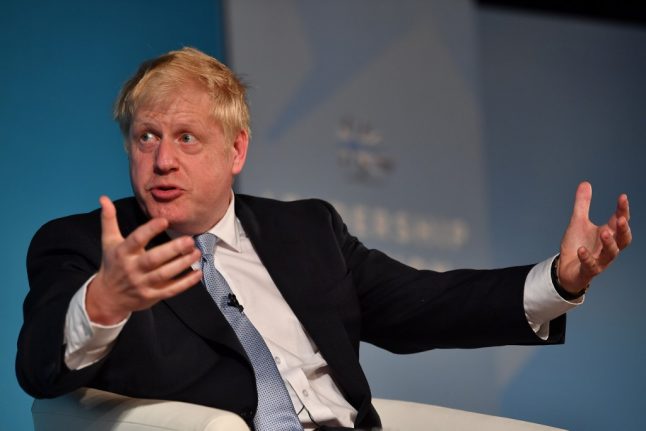 Boris Johnson, the current frontrunner in the leadership race to take over from Theresa May as Prime Minister, was filmed making the remarks as part of a documentary about his time as foreign secretary. The remarks are unlikely to be well received at the Elysées Palace. Photo AFP

In the film, parts of which were not broadcast, Johnson also accuses the French of “shafting Britain” over Brexit, before referring to “French turds”.

His remark was eventually cut from the finished version of the documentary, after the British Foreign Office told the BBC that it could cause “significant damage” to Britain.

One French journalist on Twitter sarcastically commended Johnson for raising “the quality of the political debate”, whilst posting a famous picture of the former Mayor of London stuck on a zip wire.

The remarks are likely to enrage the French government, which was already running out of patience with repeated Brexit delays and has taken a firm line on any further extensions to the current Brexit deadline of October 31st.

France has repeatedly said that it wants a warm relationship with Britain after it leaves the EU.

READ ALSO: And here's what the French think of Boris Johnson But as the process has dragged on and two deadlines came and went without Britain leaving, the French government has become more impatient.

At the crunch EU summit in which Theresa May was granted another extension until the current deadline of October 31st, Macron was pushing hard for a shorter extension period.

His stance put him on collision course with German chancellor Angela Merkel, who favoured a longer extension period, and the two have admitted that they are 'not on the same page' over Brexit.

Even after the extension was granted, Macron has continued to insist that this time, it must be the final deadline.

The famously Europhile president is reportedly frustrated that Brexit is distracting the EU from his own plans for reform of the institution.

“I was always pictured as the bad guy in the room… I endorse such a role because I think it is a big mistake to procrastinate,” Macron told a gathering of international banking chiefs at the Elysee Palace in Paris in June.

He may be happy to be called the bad guy, but whether he is willing to accept being described as a turd remains to be seen.