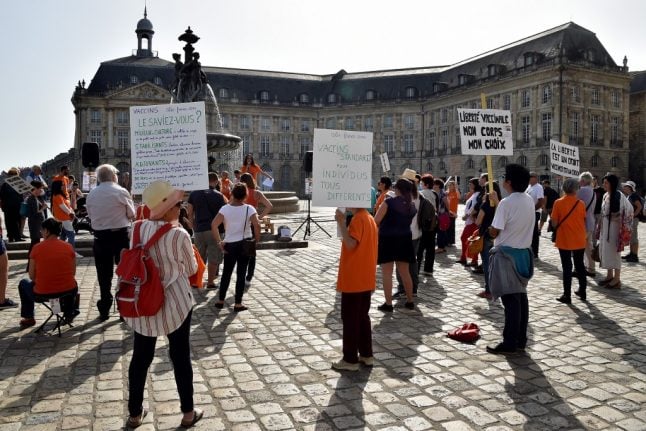 Protesters gather at the Place de la Bourse in Bordeaux in 2017 to demonstrate against the extension of compulsory vaccinations for young children. Photo: AFP
A recent survey showed that a staggering 33 percent of French people do not agree that immunisation is safe, the highest figure of any country in the world.
As a result measles, which was once considered virtually eradicated in France, has started making a marked comeback.
Naturally the government and healthcare professionals worry that this situation will only continue to get worse if the arguments against getting vaccinated continue to win over the French public.
READ ALSO: So, why are the French so concerned about vaccinations?

It seems part of the answer could be down to a natural resistance to authority which is prevalent among the French.
“France is the only country in the world that has made vaccines obligatory,” Francoise Salvadori, a biologist and co-author of Antivax, a history of the anti-vaccination movement in France, told The Local.
In January 2018, France's Health Minister Agnes Buzyn increased the number of obligatory vaccinations for children to 11, something which Salavdori said may have been problematic for the French public.
“We have never abandoned 'paternalistic medicine' despite the fact that every time more vaccines are pushed upon us, there is a greater resistance to them,” said Salvadori, who pointed out that Britain scrapped obligatory vaccinations in the 19th century.
“But it is difficult for the government to know how to take action when not enough people are being vaccinated – and yet obliging them to do so does not seem to work either.”
Like many countries, the 'Big Pharma' conspiracy theory – the idea that the medical establishment and pharmaceutical companies operate for sinister purposes and against the public good –  is prevalent in France.
On top of that in France health ministers are often doctors, and therefore seen as complicit in any dealings with the pharma industry, “stuffing their pockets and working against the public”, said Salvadori.
The results of the recent survey could also represent a more general loss of confidence in the French state of which the anti-government 'yellow vest' protests were a sign, said Salvadori, adding that France has also seen a few incidences involving vaccinations that may have made people more skeptical over whether they, or their children, need to be vaccinated. Photo: AFP
For example, during the 2009 flu pandemic which hit France as well as many other countries around the world, the French government initially ordered 1.46 doses of the flu vaccine per inhabitant – the third largest amount among members of the Global Health Security Initiative (GHSI) – behind the United Kingdom and Canada.
Eventually 50 million of the initial 94 million doses were cancelled, leading the public to ridicule the vaccination both because of the cost to the government and because the need for it had been exaggerated, cementing the idea that vaccinations were not necessary.
'Victim of their own success'
Other factors which have contributed to the growing mistrust of vaccinations among the French are also significant, although they are not exclusive to France.
For example, in countries where people are less likely to see people suffering and indeed dying from measles, there is less fear driving them to be immunised.
“Some say vaccinations are a victim of their own success,” said Salvadori. “People in France – and other developed countries – don't see how bad it [measles] is in reality.”
There is also the problem that many expect that if they do catch measles in France, the country's renowned healthcare system will be able to cure them.
“But measles is actually a very dangerous disease and there is no cure,” said Salvdori.
In France in 2018, the virus killed three people: a 32-year-old unvaccinated mother, a 26-year-old suffering from an immunodeficiency and a 17-year-old girl, and since 2008 23 people in France have been killed by measles.
Comparatively there were only 519 cases of measles registered in France for the whole of 2017. Photo: AFP
On the other end of the spectrum from France, the recent survey showed Bangladesh and Rwanda had the highest levels of confidence in vaccines, with almost 100 percent in both countries agreeing they were safe, effective and important for children to have.
Another problem that affects all countries is the influence of social networks with groups specialising in spreading conspiracy theories about everything from vaccinations, aliens and climate change to whether man did actually land on the moon, demonstrating considerable powers of persuasion.
This has proved a problem for governments everywhere – and not just in terms of anti-vaccination theories.
'Trying to explain irrationality with rationality'
Nevertheless Salvadori said that at the moment we only really have theories about why an increasing number of people are turning their backs on vaccinations.
“It's trying to explain irrationality with rationality,” she said. “It's hard to understand why people are being swayed by conspiracy theories around vaccinations when it's so easy to see how effective the measles vaccination has been.”
So how can France escape this growing problem?
Sadly, it looks like it will require more tragedy before people get the message, according to Salvadori.
“We will continue to see more cases of measles and as it becomes more ubiquitous and more people die from the disease, people will get scared and start getting immunised again. It will require awful, unnecessary things to happen before the situation will turn around.” Photo: AFP
Conspiracy theories
The resistance to vaccinations is reflective of a predilection for conspiracy theories among the French.
An Ifop poll carried out on behalf of the Fondation Jean Jaures think-tank and the Conspiracy Watch organisation found that large sections of French society believed in theories with no grounding in established fact.
One in ten French people believe the Earth may be flat and 16 percent think the US faked its moon landings, according to a new survey, which tested some of the most famous theories on a group of 1,200 people.
However according to one expert, people who are swayed by anti-vaccination arguments are not the same people who believe in other kinds of conspiracy theories.
“Our study showed that people who believe in anti-vaccination arguments are not usually believers of other theories, such as that the moon landings were faked,” Rudy Reichstadt from the Jean Jaures think-tank told The Local.
“I think that people who are not usually prone to believe in conspiracies are acting out of worry when it comes to anti-vaccination theory. They are scared that if the theories are right they would be putting themselves or their children at risk.” 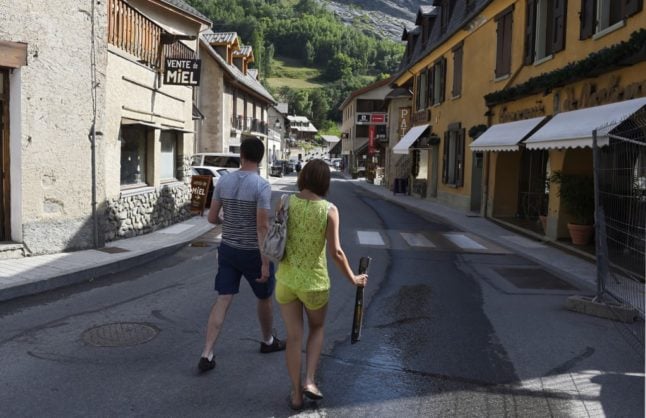